Ubuntu Phone OS is a Linux-based operating system for smartphones and touchscreen devices such as tablets, and it’s still very much a work in progress. When the developers at Canonical started showing off Ubuntu Phone OS in January, it didn’t support phone calls, cellular data, or much of anything else. It didn’t even really run any apps.

But over the past month the team has been working hard at making the OS capable enough to use as a “daily driver” on a smartphone. And they’ve kind of done it.

Now you can make and receive phone calls or text messages, access the internet over a cellular connection, and run a few apps. 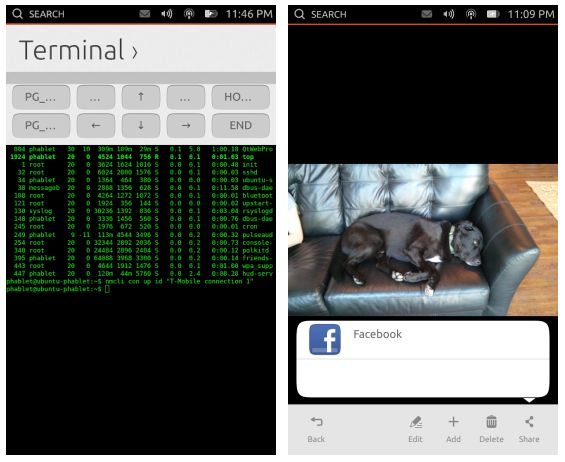 Canonical vice president Rick Spencer notes that you can now enable cellular data on a Samsung Galaxy Nexus running the latest pre-release builds of Ubuntu Phone OS. Unfortunately you’ll have to fire up a terminal app and enter a line of text to enable or disable data. There’s no GUI interface yet, but that should be available by the time the first stable build of the operating system is available later this year.

Another new feature is support for social sharing. You can now enable support for Facebook and Twitter sharing, letting you send content from many apps to either social network.

Meanwhile, Jono Bacon has posted a 10 minute video showing off a recent build of the phone, including support for phone calls and text messages, power management improvements, the web browser, and a few third party apps.

Basically there’s nothing stopping a technically-minded person from using Ubuntu Phone OS as the primary operating system on a smartphone like the Galaxy Nexus right now.

There aren’t as many apps available for Ubuntu Phone OS as for Android or other operating systems yet. You need to drop into a terminal window in order to perform some actions. And the system occasionally slows down for no apparent reason thanks to some development bugs.

But if all you really want is a phone that you can use as a phone, but which you can also use to test and help develop a new smartphone operating system based on Ubuntu, it’s starting to look like the OS is in good enough shape for that.

You can download the latest Ubuntu Touch preview images for smartphones and tablets from the Ubuntu site, and install the software by following Canonical’s guide (or our Liliputing guide, which I think is a little easier for folks who are used to flashing custom Android ROMs).