Canonical will release the first developer preview of Ubuntu Phone OS on February 21st, 2013. While the first phones designed for the Linux-based operating system won’t hit the streets until late 2013 at the soonest, you’ll be able to download and install the Touch Developer Preview on the two most recent Google Nexus phones. 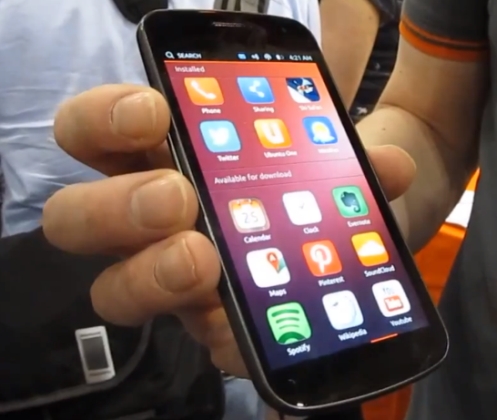 We’ve also seen other operating systems (such as open webOS) ported to Nexus hardware in the past.

Ubuntu Phone OS isn’t quite ready for prime time yet, but by making a pre-release preview available, Canonical is hoping to let developers and early adopters get comfortable with the operating system — and develop apps for the platform.

You’ll be able to find more details at the Touch Install Process wiki once the software preview is released.

Ubuntu Phone OS will share some code and some user experience elements with the company’s operating system for desktop and notebook computers. But at launch, Ubuntu Phone OS won’t be able to run desktop-style apps. Instead, Canonical is encouraging developers to write apps specifically for the mobile platform.

Eventually devices running Ubuntu Phone OS may be able to function both as mobile phones and as desktop computers. On the go you’d be able to access mobile apps. Plug your phone into a docking station and connect a mouse, keyboard, and monitor and you’d essentially have a full Ubuntu desktop experience. But this month’s preview software isn’t expected to have full desktop functionality.