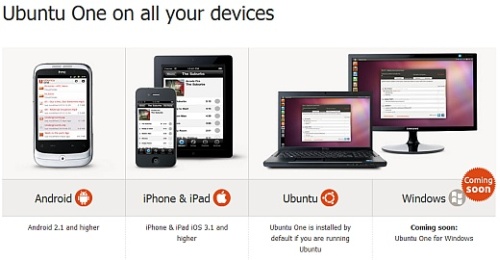 Ubuntu One provides cloud storage and synchronization to users and is tightly integrated with the popular Ubuntu Linux operating system. It allows users to store profile information and files online, and access them across different computers, operating systems, and mobile devices.  Though it’s still fairly nascent, the service has enjoyed a good deal of success among the Ubuntu Faithful.

Canonical has revealed that the Dropbox-like Ubuntu One now has more than one million users. That’s a very impressive number, considering the relatively small size of the Ubuntu user base compared to that of Windows or OS X.

Apart from reaching an important milestone, Canonical is bumping free Ubuntu One accounts from 2GB of cloud storage (the same amount offered by Dropbox) to 5GB (which is how much SugarSync offers).

Ponying up $3.99 each month will score you an additional 15GB, which is pretty good deal. Additional 20GB chunks are available at $2.99 per month, and you can add on as many as you like. Pay for a full year of Ubuntu One storage, and Canonical sweetens the deal by giving you 12 months for the price of 10.

Ubuntu One also offers client apps for Linux, Windows, Android, and iOS — and there are also mobiles apps designed specifically for streaming your music stored in the cloud.