The Acer Aspire Switch 11 is a 2-in-1 tablet which ships with Windows 8.1 software. But that doesn’t mean you’re stuck with Windows.

After finishing up a review of an Aspire Switch 11 with a 1920 x 1080 pixel display and an Intel Core i3-4012Y Haswell processor recently, I decided to see what happens when you try running Ubuntu Linux on the tablet.

For the most part, everything works great… as long as you don’t plan to use the keyboard. 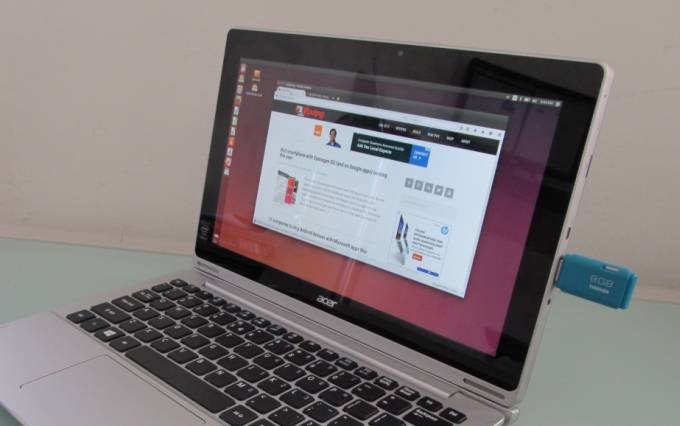 I used UNetbootin to load a pre-release build of Ubuntu 15.04 onto a USB flash drive. In order to get the Acer Aspire Switch 11 to boot from the flash drive, I had to power down the tablet and then hit the power button and press the F2 button before Windows started to load in order to get to the boot options/setup screen.

From this menu you can disable UEFI and secure boot, enable legacy boot, and tell the computer to boot from a flash drive first and only try to run software from the built-in solid state drive if there’s no flash drive present.

So far so good. Ubuntu booted pretty quickly and I was able to use the touchpad or touchscreen to interact with the operating system. But when I opened the wireless settings and attempted to login to my WiFi network I ran into a speedbump: the keyboard didn’t work so there was no way to enter my password.

I’m not the first person to have this problem.

Update: But there does appear to be a fix for folks who are comfortable patching the Linux kernel.

Once I hooked up a USB keyboard I was able to login to my network, surf the web, use a word processor, and perform other activities that required a keyboard. I don’t really have experience using on-screen keyboards with Ubuntu, but it’s possible that you could use a virtual keyboard instead of a physical keyboard if you primarily plan to use the Switch 11 in tablet mode.

Overall, the system seems at least as responsive when running Ubuntu as it does with Windows. It’s just a shame that the keyboard isn’t automatically detected. Hopefully future versions of Ubuntu will address the issue. It’s possible that other Linux-based operating systems might already work better… I just don’t have time to test them all.

Ubuntu Next with a touch-optimized interface sort of works, but the web browser crashes on me every time I try to use it and the keyboard still doesn’t work. Linux Mint 17.1 with the Cinammon desktop environment loads just fine, but neither the keyboard nor the touchpad work out of the box (although the touchscreen does work).

The Acer Aspire Switch 11 is available from the Microsoft Store for $449.