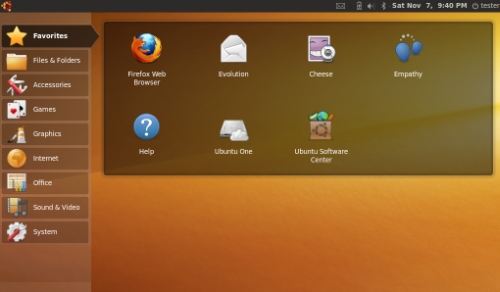 Ubuntu Netbook Remix is a custom user interface for the popular Ubuntu Linux distribution designed to play well with laptops with small screens. Instead of dealing with a panel and a series of drop down menus, Ubuntu Netbook Edition has a series of categories on the left side. Click on Accessories, Games, Internet, Office, or another category to bring up a series of large icons for accessing the associated programs and settings. It’s also tweaked with optimizations for Intel Atom processors.

All in all, it’s a pretty decent UI for netbooks, if not quite as slick and polished as the default Moblin user interface. But what’s with the “Remix” thing in the name? A remix is described as a “respun” version of the operating system “built for a specific purpose.” In other words, it’s not quite as full-featured, or fully supported as an “Edition.”

But now it looks like the folks at Canonical are getting ready to help Ubuntu Netbook Remix graduate to Ubuntu Netbook Edition status. According to the Blueprint for Ubuntu 10.04, it’s time to drop the Remix. That could mean that Ubuntu Netbook Remix would be considered a complete version of Ubuntu, with more frequent builds and additional support. Or it could just be a new name for an existing product.