Canonical wants to build a smartphone unlike anything on the market, and the company wants your help to do it. Last week the company announced plans to raise $32 million for the project through crowd-funding site Indiegogo.

That’s more money than anyone’s ever raised for any crowd-funded project. But the Ubuntu Edge project got off to a very strong start, raising millions of dollars in less than a day.

A week later, the tally is at over $7 million, which is pretty impressive when you consider that no other project on Indiegogo has raised more than $2 million.

But there’s still a long way to go — Canonical wants to raise $32 million by August 21st. And that means that one week in, the fund-raising is running behind schedule. 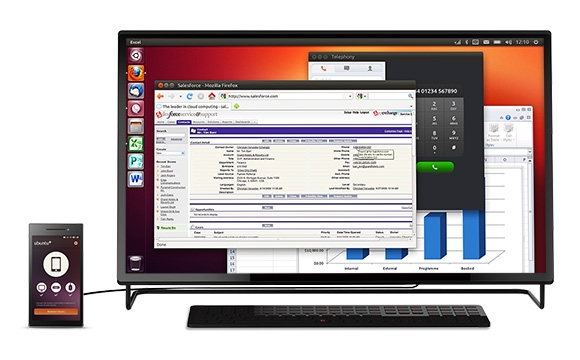 If Canonical meets its goal, the plan is to ship the Ubuntu Edge smartphone in the first half of 2014. It would have a 4.5 inch, 720p display, 4GB of RAM, and 128GB of storage. The phone would dual boot Ubuntu and Android software.

Ubuntu would give users access to Canonical’s smartphone-friendly version of the open source operating system. When you connect the phone to a docking station, you’ll also be able to use a keyboard, mouse and monitor to run full-blown desktop apps such as Firefox, GIMP, AbiWord or LibreOffice. Essentially, the Ubuntu Edge might be the only device you need, combining the functions of a smartphone and a desktop computer (assuming you don’t need a super-speedy desktop PC).

The ability to boot Android on the phone, on the other hand, would help make up for the fact that there probably won’t be very many high quality Ubuntu phone apps available by the time the device ships (if it ships). Since odds are that someone would figure out how to load Android on the device anyway, shipping the Ubuntu Edge with both Android and Ubuntu preloaded seems like a smart move.

Thousands of people have pledged to the project already, claiming some of the lower-priced rewards such as early bird prices for the smartphone. But at this point you need to spend $775 or more to reserve a phone which may or may not ever actually hit the streets, which makes the Ubuntu Edge project a bit of a tough sell.

It’s not that the phones aren’t worth the asking price of up to $830. No other phone released to date has 128GB of built-in storage, for instance. But it’s a lot of money to ask for an untested device — especially because of the way crowd-funding works. If Canonical doesn’t raise $32 million, the project will be scrapped. But even if the company does meet its goal, there’s no guarantee that it will success in bringing the Ubuntu Edge phone to market.

Still, it’s an interesting time for folks keeping an eye on the Ubuntu space. Not only is Canonical already trying to expand its popular GNU/Linux operating system to run on phones and tablets as well as PCs, but now the company’s considering getting into hardware — and this ambitious crowd-funding campaign is an interest test of the strength of the Ubuntu community, the interest in this sort of device, and people’s willingness to put their money where their mouths are.

16 replies on “Ubuntu Edge raises an impressive $7 million in a week, still running behind goal”