The operating system’s come a long way in the past 11 years, but so have the devices that can run Ubuntu. For the past few years Canonical has been working to bring Ubuntu to smartphones, and you can already purchase a few phones that come with Ubuntu pre-loaded or install it on some phones or tablets yourself.

So what’s next? Soon it might not matter whether you’re using a phone or desktop, because Ubuntu will support the same apps on both platforms. 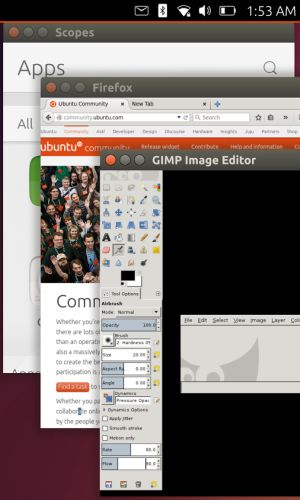 Canonical calls this convergence, and the idea is that not only will Ubuntu phones be able to run apps optimized for devices with small, touchscreen displays, but they’ll also be able to run full-fledged desktop apps.

This means you can open LibreOffice or GIMP on your phone. But it also means you can plug your phone into an external display and hook up a keyboard and mouse to use it as a desktop.

The developers of Ubuntu have been working on convergence for a while, and even tried to crowdfund a powerful smartphone that would ship with the feature. That campaign failed to reach its goals, but convergence is still on the way, and it should be available for smartphones users in the not too distance future.

In fact, some developers have already started sharing pictures of desktop apps running in an Ubuntu phone user interface.

Canonical isn’t the only company working on software that lets you use a phone like a desktop PC. Microsoft’s Windows 10 mobile operating system has a feature called Continuum for phone that lets you hook up an external display and view a desktop-like environment. Your phone’s start screen becomes a start menu. There’s a taskbar. And apps like Microsoft Office take advantage of the extra screen real estate to use a desktop-style layout.

But Windows 10 Continuum for phone has limitations: apps only run in full-screen mode and the vast majority of Windows apps won’t run unless they’ve been converted to Universal Windows apps first.

Ubuntu, meanwhile, is shooting for support for the “full range of desktop applications” with its convergence service. That said, developers will still need to tap into Ubuntu’s software development kit to enable mobile support for desktop apps… and desktop support for mobile apps. So it wouldn’t be surprising if Ubuntu’s convergence looks a lot like Microsoft’s Continuum at launch: not all apps will be supported right away.

via The VAR Guy