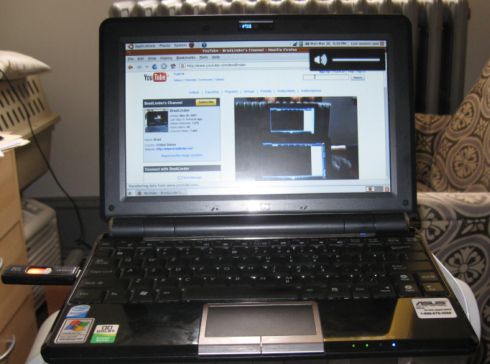 The next full version of the popular Linux distribution Ubuntu is due out in April. But you can already download and try out a beta version of Ubuntu 9.04 Jaunty Jackalope if you’re willing to put up with the possibility of finding a few bugs. One of the most exciting changes in Ubuntu 9.04 is improved support for a number of netbooks, particularly models with Intel Atom processors.

I downloaded the latest beta and loaded it onto a 1GB USB flash drive using UNetbootin. You can try out Ubuntu without making any changes to your system by running it as a LiveUSB. If you decide you want to install it, just click the install icon on the desktop and follow the instructions. You can either overwrite any existing operating systems or try to make them live peacefully next to one another.

Long story short, when I plugged the Ubuntu 9.04 flash drive into my Eee PC 1000HE, the operating system booted quickly and all of the hardware just worked. The keyboard shortcuts for adjusting the volume and screen brightness work, the WiFi card is recognized, and I connected to my home network in a matter of seconds. The only problem I noticed is that the speakers seem substantially quieter than they are under Windows XP or Windows 7.

Ubuntu Mini reports that Jaunty Jackalope also supports the Dell Inspiron Mini 9. Have you tried Ubuntu 9.04 on your netbook yet? Let us know how it went in the comments.