Ubuntu 22.04 LTS is now available. As a Long Term Support release of the popular GNU/Linux distribution, it’ll be officially supported for at least five years. That means Ubuntu 22.04 will continue receiving bug fixes, security patches, and other updates until April, 2027, making it a good choice for folks that don’t want to get used to a new version of the operating system every six months.

Among other things, the latest version of Ubuntu brings an updated kernel and default apps, a new default wallpaper and login screen, and a new screenshot tool. The default desktop environment has also been updated to GNOME 42, which brings support for a global dark mode, a new screenshot tool, and performance improvements. 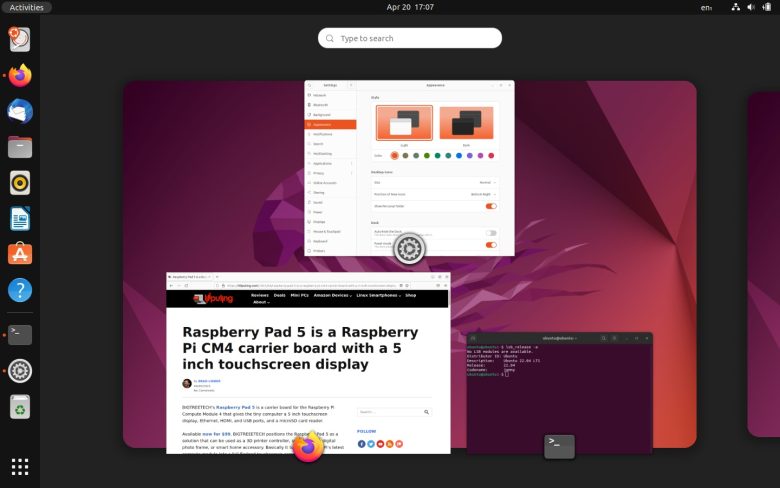 Ubuntu 22.04 LTS is also the first Long Term Support release to support Raspberry Pi hardware, since official support for running Ubuntu on Raspberry Pi’s low-cost, low-power computers has only been around since Ubuntu 20.10 was released in late 2020.

Canonical says that you’ll be able to run Ubuntu 22.04 LTS on Raspberry Pi 4 or Raspberry Pi Zero 2W devices with at least 2GB of RAM.

Other changes in Ubuntu 22.04 LTS include the use of Wayland as the default display server, support for resizing the size of icons in the dock (which effectively resizes the dock itself), support for choosing one of 10 different accent colors for the Yaru theme, support for enabling or disabling animations in the Accessibility settings, an update to Linux kernel 5.15, and updated versions of pre-installed applications including Firefox, Thunderbird, and LibreOffice.

Canonical has also updated the Ubuntu installer with a new version that more closely matches the desktop theme.