This week Canonical released Ubuntu 18.04 LTS, and while the company is emphasizing cloud features and performance, there are plenty of updates for desktop users too.

But if GNOME isn’t your thing, there are also updated versions of all official Ubuntu flavors, including Kubuntu, Lubuntu, Xubuntu, Ubuntu Budgie, and Ubuntu MATE. Each has a different desktop environment which means that while they’re all based on the same core Ubuntu software, they each have a different user interface and set of pre-installed applications.

It’s been a while since I last took Ubuntu MATE for a spin, so I figured I’d fire up version 18.04 to see what’s new. 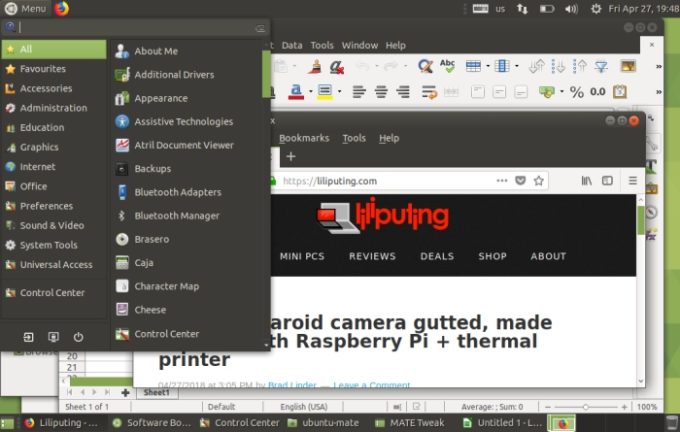 The latest update includes a move from MATE 1.12 to MATE 1.20.1, improved support for HiDPI displays (screens with a high number of pixels-per-inch), and support for new file manager features including bulk file renaming, encryption, and hash checking.

There’s also hardware acceleration for the Marco window manager, which brings improved 3D rendering for games an other applications.

MATE’s default user interface may look a lot like the classic GNOME 2 UI, but it’s very customizable, and there are a number of pre-loaded layouts you can choose from including the Windows-like “Redmond,” which puts a start menu and taskbar at the bottom of the screen, “Cupertino,” which gives you a macOS-like dock, and a new option called “Familiar,” which is now the default.

Familiar looks a lot like the old default layout, with a top panel for menu items and a bottom panel with shortcuts for currently running applications. But there’s a new all-in-one Brisk Menu with an integrated search bar rather than the separate Applications, Places, and System options featured in the “Traditional” layout.

You can still switch to Traditional or another layout using the MATE Tweak tool.

Other changes in Ubuntu MATE 18.04 LTS include a minimal install option that just loads the desktop, some core utilities, and the Firefox web browser, a few new options in the Welcome screen that greets you after installation, optional support for a Head-Up Display that lets you find menu items as you type, and updated versions of default apps including Firefox, Thunderbird, LibreOffice, and VLC.

Or you can check out the release notes for other Ubuntu 18.04 LTS flavors to see what’s new with Lubuntu, Xubuntu, Kubuntu, or Ubuntu Budgie.

There’s also a new version of Ubuntu Studio… but according to the release notes, it’s not an LTS (long term support) release, and other than the changes found in Ubuntu 18.04, there are “no notable changes in this release since 17.10.”