Canonical releases a new version of its Ubuntu Linux operating system every six months, which means that sometimes it’s hard to spot the big new changes from one release to the next.

But this week the company is releasing Ubuntu 16.04 and it’s special for a few reasons. First, it’s a Long Term Support (or LTS) release, which means Canonical will continue to offer support and software updates for 5 years. And second, this is the first full version of Ubuntu to support snap packages as well as .deb packages. That will make it easier to get new builds of software more quickly. 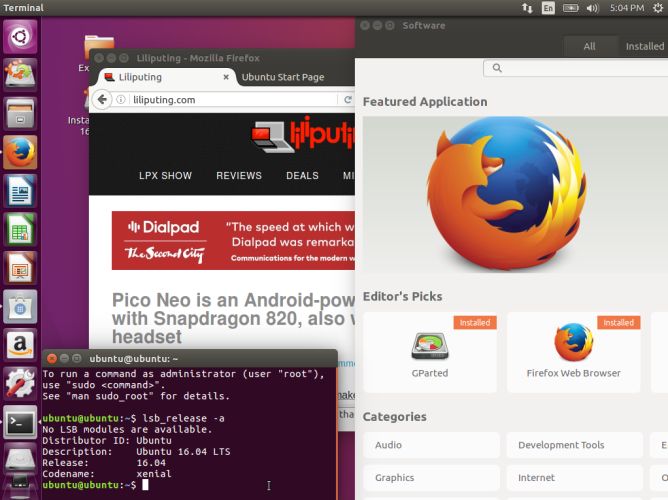 Canonical offers an LTS release every 2 years, so the last time there was a new one was when Ubuntu 14.04 launched in April, 2014. Since many corporate users prefer to only install LTS releases, that means Ubuntu 16.04 LTS will be a bit of a bigger change for those users than for the average desktop PC user.

Ubuntu has been marching toward “convergence,” in recent years. That means the same operating system can run on a range of devices including smartphones, tablets, and desktops. Recently the first tablet to support Ubuntu’s convergence mode went on sale, allowing you to use a tablet-style user interface when holding the device in your hands, or a desktop-style interface when a mouse is detected.

One of the new features that made its debut with Ubuntu for phones and Internet of Things products was the new “snap” packaging system, which is now coming to the desktop version of Ubuntu.

You can still install .deb files, but now you can also find snaps in the Software store (the Ubuntu Software Center is being replaced with GNOME Software) or using command line tools. Developers can also use the new Snapcraft tool to create snaps.

The advantage is that snaps include all the software dependencies for the application you’re installing so you don’t need to rely on different developers to submit their software to the Ubuntu repositories before you can install the latest version of an application. Canonical says its Snappy system is also more secure, since packages are self-contained and isolated from one another so that a bug in one doesn’t affect others.

Other updates for desktop users include support for moving the Unity launcher to the bottom of the screen if you’re not a fan of having it on the side, support for the ZFS file system, and the operating system uses version 4.4 or the Linux kernel.

Ubuntu desktop users will also get newer versions of the Firefox and Chromium web browsers and LibreOffice suite, and improved support for high resolution displays. The GNOME Calendar app is now included by default, but the Brasero disc burning utility and Empathy chat app have been removed from the default installation.

Ubuntu 16.04 LTS launches for desktop, server, and other platforms on April 21st. Canonical will also update the recently releases Ubuntu on Windows software for Windows 10 to Ubuntu 16.04 in the coming months.