The latest version of Ubuntu Linux is now available for download. That’s hardly surprising. Canonical has been cranking out new builds of Ubuntu every six months like clockwork for years. Ubuntu 13.10 Saucy Salamander is right on schedule.

What’s new is that for the first time Ubuntu isn’t just designed to run on desktop, laptop, and server PCs. There’s also a new Ubuntu Touch operating system designed for smartphones and tablets.

Canonical is working with device makers and the first phones and tablets with the software pre-installed could be available in the coming months. But you can also install it yourself if you have a supported device such as a Google Nexus phone or tablet. 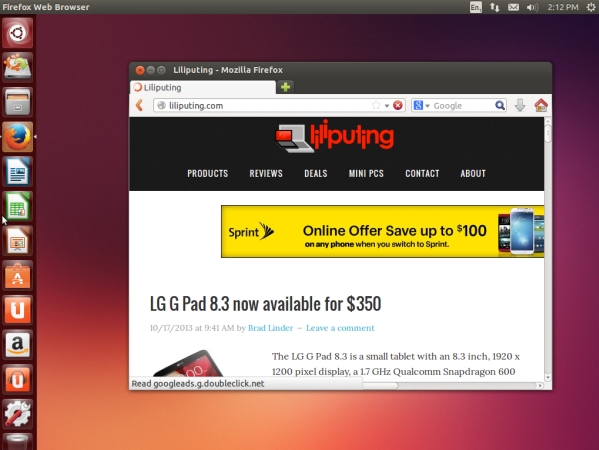 Update: Ubuntu is officially available for phones and tablets. You can find instructions for installing Ubuntu 13.10 on a Samsung Galaxy Nexus or Google Nexus 4 at the Ubuntu website.

At this point, Ubuntu Touch still feels a lot like a work in progress. There still aren’t a lot of touch-friendly apps available for the platform, and there’s not yet an easy way to connect your phone to a keyboard, mouse and monitor and use it as a full-fledged PC. That’s expected in a future release.

So what’s new in the desktop version of Ubuntu? Not as much as you might expect. The developers had hoped to implement a new display server called Mir by default, but it’s not ready for prime time yet.

What you do get are the option to login to the Ubuntu One cloud storage service during setup, optional support for NVIDIA Optimus graphics switching, Smart Scopes in the Unity desktop environment (which will try to offer search results that are more relevant to your queries), and an update to the Linux kernel 3.11.

If you’re not a fan of Ubuntu’s Unity desktop interface, Kubuntu, Xubuntu, Ubuntu GNOME, and other variations on Ubuntu 13.10 have also been released — or you could just install the main branch of Ubuntu and choose to install the KDE, Xfce, GNOME, LXDE, or other desktop environments manually.

4 replies on “Ubuntu 13.10 launches for desktops, laptops, smartphones, and tablets”