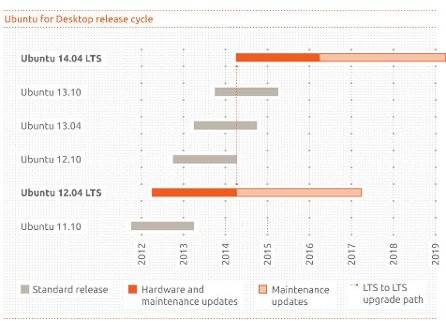 Canonical has announced that the next “Long Term Support” or LTS version of Ubuntu Linux will receive 5 years of support and maintenance. Up until now, the company only offered 3 years of support for its LTS projects, but the idea is to offer extended support for Ubuntu 12.04 to encourage corporations to install Ubuntu.

That’s a pretty big commitment from a software maker that released its first product just 7 years ago. But since Ubuntu first release, the open source operating system has become one of the most popular Linux distributions in the world.

Canonical annoyed a lot of long-time users recently by dropping GNOME as the default desktop environment and developing an in-house user interface called Unity instead. Other Linux distros such as Mint, Fedora, and Debian are nipping at Ubuntu’s heels in the DistroWatch leaderboard, for instance.

But whether you’re a fan of Unity or not, Canonical has proven time and again that it can produce a stable, powerful desktop operating system. In fact, Canonical releases major Ubuntu updates every six months like clockwork.

The Long Term Support versions of Ubuntu are aimed at users that would prefer a stable user experience over frequent updates though. Ubuntu 12.04 is due out in April, 2012.

The next LTS release after that will be in April, 2014 when Ubuntu 14.04 is released. Canonical also promises to support that version of Ubuntu for 5 years, which means support will run through 2019.