Just in case you had any doubt that the MK802 $74 PC-on-a-stick was a versatile computer, the folks at Miniand Tech have compiled several versions of Ubuntu 12.04 Linux that can run on the little computer.

We’ve already demonstrated that the MK802 can handle Android 4.0 (which it ships with), Puppy Linux, and Ubuntu 10.04. But if you want a more up-to-date and full-featured operating system, Ubuntu 12.04 is hot off the presses. It was released in late April. 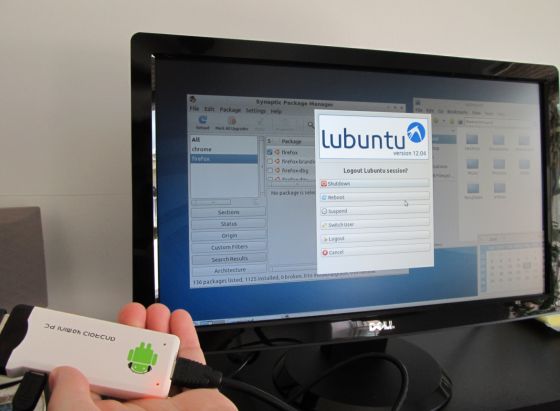 LXDE has a reputation for running well on slower hardware, so I decided to take Lubuntu for a spin, and it booted quickly on the little computer and felt reasonably fast.

No desktop operating system is going to be a speed demon on a computer with a 1.5 GHz Allwinner A10 processor and 512MB of RAM. But Lubuntu 12.04 launched applications pretty quickly and I didn’t have any problems downloading and installing software from the Ubuntu repositories.

Unfortunately, while I was able to connect to my WiFi network in just a few seconds, I ran into some trouble getting the web browsers to work properly. This version of Lubuntu comes with the open source version of Google’s Chrome web browsers, but I couldn’t get any web pages to open in Chromium.

I downloaded and installed Firefox, partly just to see if the MK802 really was connected to the internet. It was, and Firefox was up and running in a few moments — but it wouldn’t load any web pages either.

Overall, if you can get the web browser to work, Lubuntu seems like a good option for a Linux-based operating system for the MK802. It offers a more robust set of features (and looks a little nicer) than Puppy, but doesn’t feature all the eye candy associated with Ubuntu’s Unity environment.

As usual, the MK802 refused to output a 1080p signal when connected to my monitor, and instead Lubuntu defaulted to a 1280 x 720 pixel desktop — which causes overscan problems with my monitor. Some menus didn’t fit perfectly on the screen, but just enough of the system taskbar was visible to let me navigate menus and settings without much trouble.

You can actually run any number of Linux-based operating systems to run on the MK802. CNX Software has instructions for preparing your own bootable microSD card with Ubuntu, Debian, or another OS.

But it’s always a lot easier to simply use a pre-built disk image. Miniand Tech’s website has instructions for preparing a bootable microSD card using a Mac, Linux, or Windows computer — but if you’re using Windows, you can pretty much follow the more detailed steps from our Ubuntu 10.04 guide, simply using the 12.04 image instead.

Miniand is a retailer that plans to begin selling the MK802 soon. You can also buy the mini PC from the Rikomagic store at AliExpress for $74.