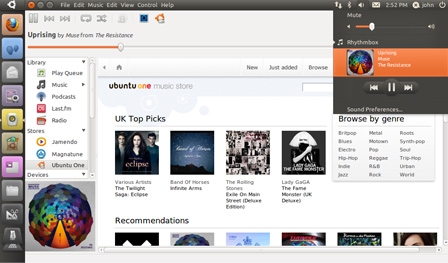 Canonical developed a new user interface for Ubuntu 10.10 Netbook Edition, called Unity. While GNOME has panels at the top and bottom of the screen, Unity instead has a top panel and a panel on the left side which you can use to quickly launch apps and access running apps. Unfortunately, while Unity was designed with netbooks in mind, many netbook users have panned the new UI, saying it’s sluggish and requires too much scrolling when viewing web sites and running other apps — since Unity eats up too many horizontal pixels.

That doesn’t seem to have stopped Canonical from moving forward with Unity though. Founder Mark Shuttleworth has announced that the next major release of Ubuntu will replace the GNOME user interface with Unity. GNOME applications will continue to work, and in fact the GNOME Desktop Environment will still run in the background, but Unity will be the default user interface.

Users who still want to use the GNOME desktop will be able to install a special version of Ubuntu… or download the primary installer and modify the settings yourself. After all, Ubuntu is still open source software and you can make pretty much any changes you like. But I suspect a fair number of users stick with the out-of-the-box experience when downloading a new version of a Linux distribution such as Ubuntu.

Hopefully Canonical’s increased focus on the Unity interface will lead the developers to optimize the UI for better performance on computers with slow processors and small screens such as netbooks… you know, the original target for Unity.

12 replies on “Ubuntu 11.04 to replace GNOME interface with Unity”