The developers of the Ubi voice-controlled Android computer are now taking pre-orders with prices starting at $219. There are volume discounts, so you can order a 10-pack for $1399 and use them throughout the house or give them away as holiday presents… next year. The first Ubi devices aren’t expected to ship until April, 2013. 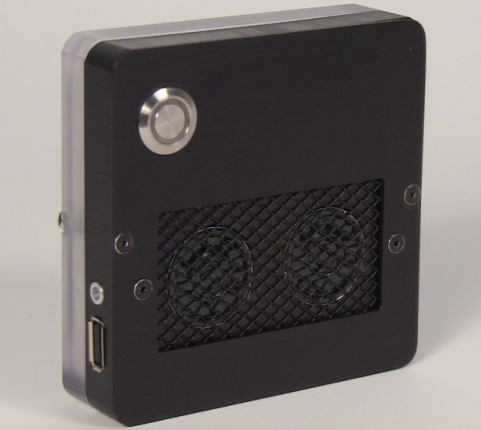 The Ubi is designed to be a device that you plug into a wall jack and use by speaking to it. For instance, you can ask it for a weather forecast, conduct a Google search and have it read the responses to you, or adjust your thermostat with your voice.

Under the hood the device features Android 4.1 software, an Allwinner A10 processor, 1GB of RAM, WiFi, Bluetooth, a mic, speakers, and an RF transceiver. It also has a range of sensors for measuring temperature, light, air pressure, and other conditions.

That could allow the Ubi to act as a thermostat or control other functions in your house or office without any user intervention. A lot of what the Ubi can and cannot do will be determined by whether independent developers write apps for the platform — although the makers of the Ubi are already working on search, email, intercom, and home automation features.

In some ways the Ubi seems a lot like a less capable smartphone or tablet since there’s no screen or battery. But while the device is running Android, the idea is to think of it as a home appliance, always-on computer rather than a screenless phone.

It’s up to you to decide whether that’s worth spending $219 on… but prices will go up to $269 once the pre-orders end and shipments begin next year.

More than a thousand people did seem to like the idea enough to fund a recent Kickstarter campaign. The Ubi team raised nearly $230,000 for the project. That’s pretty impressive, especially since their original goal was to come up with $36,000.