Most Android devices are smartphones or tablets that feature touchscreen displays. But the folks behind the Ubi project want to take advantage of Android’s built-in voice control features to deliver an inexpensive home computer that you use just by talking to it.

The developers are running a Kickstarter campaign to get the device off the ground, and they’ve already surpassed their $36,000 goal. You can reserve one of the first devices with a $189 pledge. 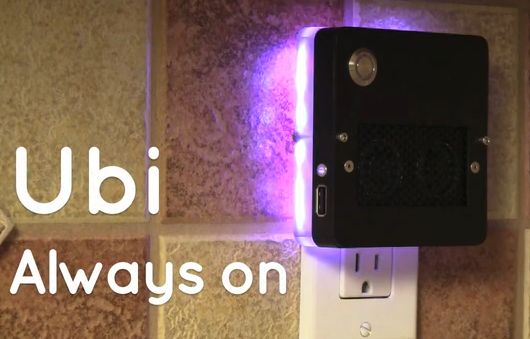 Ubi stands for Ubiquitous computer, because the idea is that you plug the device into a wall jack, connect it to your WiFi network and it’s on all the time. You don’t have to pull it out of your pocket or pick it up from a table to use it. You just start talking to it.

Theoretically you can use this to set alarms, listen to podcasts, make voice calls, or even search the internet. There are also sensors that can monitor temperature and other conditions to trigger actions or alerts. You might also be able to use the Ubi as a smart thermostat.

It’s not clear how many of these apps are currently functional. But as an Android device, it should be relatively easy for developers to write third party apps that take advantage of the Ubi’s software.

On the other hand, I’m not entirely convinced that a screenless Android device will be up to some of these tasks. While Google Android 4.1’s built-in voice search features do a great job of answering some questions about the weather, time, and sports schedule by speaking the answers, many queries lead to a page of search results, a map, or some other visual element that requires a display.

Still, the Ubi has a sort of living-in-the-future feel to it, which makes the project kind of exciting… even if we won’t know just how well the finished product works until it ships in early 2013.

Under the hood, the Ubi has an 800 MHz Allwinner A10 ARM Cortex-A8 single core processor (much like the one in the MK802), 1GB of RAM, 802.11n WiFi, Bluetooth 4.0, a mic and speakers, an RF transceiver, light, humidity, temperature, and air pressure sensors, an Android 4.1 Jelly Bean software.

The Ubi team plans to deliver the first beta units in January, 2013 with general shipping starting in February.

One reply on “Ubi envisions an always-on, voice activated Android device for your home”