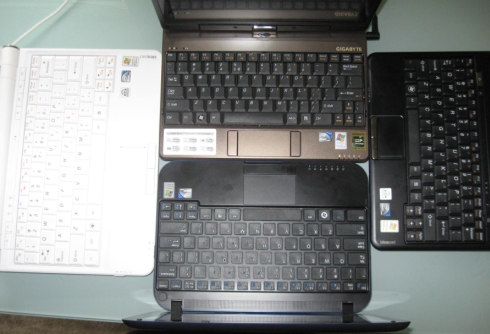 As I mentioned the other day, I have a whole lot of mini-laptops sitting on my desk at the moment. So I decided that today would be as good a time as any to do a little keyboard face-off.

I’d already kind of decided that of the netbooks I’m using this week the Samsung Go (shown in the bottom of the picture) has the keyboard that feels the best. I like the chiclet-style layout, the keys are comfortable and responsive, and their laid out quite nicely with a large right-side shift key and arrow keys below it. I’d also decided that the Gigabyte TouchNote T1028X (pictured at the top) had the worst keyboard, thanks to its extra-thin punctuation keys for the period, comma, and question mark.

But you know what? The typing test results told a completely different story.

I used TypingTest.com to conduct a series of tests, each two minutes in length. I used different sample text for each test in order to prevent myself from becoming familiar with the text and typing it from memory instead of typing from the screen. I did discover that some tests were a bit easier or more difficult than others. For example, my typing speed on the TouchNote T1028X was much higher when typing a test that didn’t include much punctuation. So I made sure to take more than one test with that netbook.

Clearly, the Lenovo IdeaPad S12, which has the largest keyboard of the bunch, thanks to the computer’s 12 inch display, appears to be the easiest to use. But under some situations, the Gigabyte TouchNote T1028X can be almost as easy to use. 98 words per minute on a keyboard that’s less than full size is pretty impressive.

It’s worth pointing out that I have relatively small hands, and I’ve often found that I can type faster on smaller keyboards than large ones. But what really surprised me is that the Samsung Go keyboard which feels like the most comfortable of the bunch, was actually the one I had the most trouble typing with. Just to be certain I took another test on the Samsung Go using a different bit of sample text, and my scores was virtually identical.

Of course, your results may vary.

What do you look for in a keyboard? And have you actually taken a typing test to see if your favorite keyboard is actually the one you type the fastest or most accurately on?