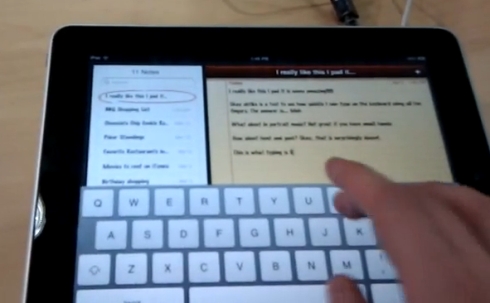 I finally got a few minutes to play with an iPad yesterday. And after reading dozens of reports of people proclaiming that the on-screen keyboard and typing experience was either absolutely horrible or actually pretty good, I got a chance to decide for myself — sort of. To be honest, I suspect you need to spend a lot more time with the iPad before you really get a sense of how you’ll use it. But since I was out running errands, I didn’t have a few hours to hang out in Best Buy’s Apple section, so I just got a few minutes of hands-on time.

You can check out a brief video after the break, but in a nutshell, here’s what I discovered:

In portrait mode, you can hold the tablet in both hands and use your thumbs to type. But it helps if you have big hands. And overall the experience is much more awkward than on a smartphone. This is because you end up gripping the iPad with your fingertips and stretching your thumbs pretty far in order to tap on keys while you can easily hold a smartphone in two hands and hit every key without moving your thumbs very far at all.

In landscape mode, thumb-typing is pretty much out of the question. But the keyboard really is large enough to touch-type on. The problem is that there’s nowhere to rest your palms. So touch-typing isn’t as fast or comfortable as on a normal keyboard, because you have to sort of poke at each key instead of resting your palms on the base of the keyboard and slightly shifting your fingers. And of course, there’s no tactile response.

The other problem with touch-typing on the on-screen keyboard is that you have to figure out where to place the iPad. The displays at Best Buy had the iPads resting on slightly angled pedestals just above waist height. This tilted the displays slightly to give you a comfortable typing angle while looking almost straight down at the screen. I could definitely see typing at this angle for a little while without becoming uncomfortable. But try doing it for a half hour and your neck is likely to get very sore.

Of course, most people don’t stand and type. They sit at a desk or table. At that angle, even with a tilted pedestal (or Apple’s $39 case accessory which lets you tilt the screen a bit), you’re going to have a hard time seeing the screen while you type if you rest the iPad on a table.

This means the most comfortable touch-typing position is — as showcased in almost every Apple promotional video — sitting down with your feet up on a table or lying in bed with your knees up and the iPad propped against them.

But I’m probably being overly nitpicky here, because let’s be honest. Nobody expects you to tap our your doctoral dissertation on the iPad using the on-screen keyboard. And the truth is, the keyboard is more than good enough for entering URLs, leaving blog comments, writing instant messages, or composing short emails. I wouldn’t want to replace a netbook or notebook keyboard with an iPad-style on-screen keyboard. But it’s likely that most people will be able to type faster on this large keyboard than on the small on-screen keyboards that you get with the iPhone and most other touchscreen smartphones.

One-handed typing is also easier on the iPad than on the iPhone — because there’s room can use more than one finger. While I pretty much just use a single thumb to tap out text when holding an iPod touch in one hand, the iPad lets you hold the tablet in one hand and type with the other. It’s certainly not the fastest way to enter text. But as I mentioned, if you simply need to enter a URL, it’ll do.

And since I happened to be holding my camera in one hand while shooting a hands-on video with the iPad yesterday, that’s exactly what you’ll see in the video below: Me typing with a single hand.

2 replies on “Typing on the iPad – Video”