It’s been nearly a month since Google’s Pixel and Pixel XL phones have hit the streets. They’re the first phones to ship with Android 7.1 Nougat software with support for file-based encryption and seamless updates, thanks to a new partitioning scheme.

But hackers who have been rooting smartphones and flashing custom ROMs for years have been hard at work figuring out how to do those things with the Pixel and Pixel XL, possibly paving the way for hacks of future Android 7.1 phones from other device makers.

A few weeks ago a method was found for rooting the phones. Now you can install a custom recovery. 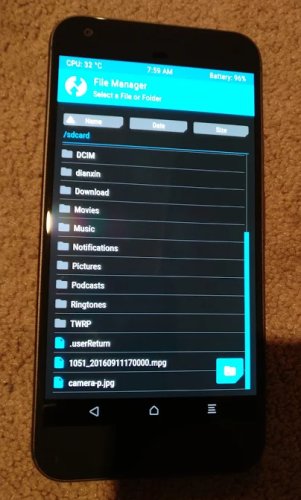 Developer Dees Troy has posted an early alpha version of TWRP (Team Win Recovery Project) with support for the Pixel and Pixel XL.

The utility allows you to backup all the data on your device, restore a backup (to basically rest the phone to an earlier state), or flash custom firmware updates.

This is the first publicly-available build of TWRP to support Pixel phones, and it’s still very much a work in progress. Unless you’re cool with the possibility of accidentally wiping all the data on your device, you might want to hold off on using TWRP until it’s a bit more stable.

Update: SuperSU has been updated to work with TWRP on the Pixel phones.

Also, the file-based encryption can cause some problems: a failed restore could cause all of the data on your phone to be erased. And if you have multiple user accounts on your phone, you’re out of luck: TWRP alpha can only decrypt one user’s files.

On the other hand, there are some nifty new opportunities that the Pixel phones present to users of custom recoveries.

Seamless updates on the Pixel phones means there are basically two separate slots for firmware. Only one is typically active at a time: operating system updates can be downloaded and installed on the second slot in the background, allowing you to quickly reboot into an updated build.

TWRP will only backup one slot at a time, so you may have to manually change the slot you want to backup or restore. One nifty feature is the ability to backup slot A and restore it to B, or vice versa, which could come in handy if and when developers figure out how to use the new disk partition scheme to support booting two different operating systems on the same phone (for example, run CyanogenMod 14.1 in one slot, then reboot your phone to have a more stock Android experience).