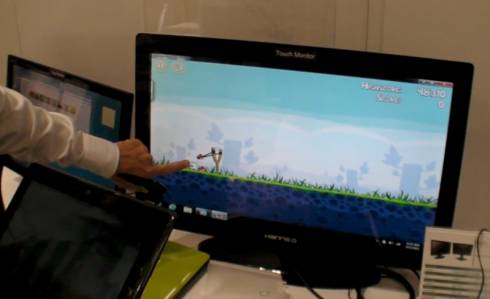 There are plenty of tablets that let you plug in an HDMI cable and connect it to a monitor or HDTV to watch videos on a big screen. But a company called HannsG is going a few steps further.

The company is showing off a new wireless USB display technology that does two interesting things. First, it streams content from your device to an external display without any wires. And second, it’s a two-way street. You can also use a touch-screen monitor to control the action on your Android device.

Charbax from ARMdevices.net got a demo at the IFA trade show in Berlin this week. The HannsG rep showed what happens when you’re playing a game of Angry Birds: Not only does the game show up on the external display, but you can pull back on the slingshot and fling your birds using the monitor instead of the tablet.

It looks like the tablet doesn’t connect directly to the monitor. The displays seems to be connected to a computer running Windows 7, with Angry Birds showing up in a window. But it’s still a pretty impressive tech demo.

Unfortunately it also appears to be a work in progress. The graphics frame rate is pretty slow at this point, which could make it difficult to actually play games. For streaming video, you’re probably still better off plugging in an HDMI cable.