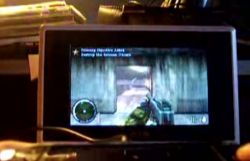 Netbooks like the Asus Eee PC may not have the graphics processors or CPU speed to handle bleeding edge video games. But they’re plenty fast enough to help you get your fix of old school games like StarCraft. Or if you’re a bit more ambitious, it turns out you can also install a Windows application called RemoteJoyLite that will let you plug a Playstation Portable (PSP) into a USB port and turn your netbook into an external display for your handheld game console.

While the games still run on the PSP itself, RemoteJoyLite makes it look and feel like the PSP is just a remote control.

The PSP has a decent screen for gaming in the back seat of a car or on a train. But if you’re planning on getting your game on while lounging around the house, this hack will let you play your games on a larger screen.

You can find a video showing RemoteJoyLite running on an Eee PC 701 after the break. The software isn’t officially sanctioned by Sony, so I’m not going to link to it here. But if you’re familiar with a search engine called Google, you shouldn’t have too much trouble finding a download link.

3 replies on “Turn your netbook into a Playstation Portable display”