The reMarkable tablet features a 10.3 inch black and white E Ink display, support for finger or pen touch input, and a custom operating system designed to let you read, write, and draw.

But if you’d rather use the device like a laptop or tablet, there’s a new third-party operating system that will let you do that.

Parabola-rM is a GNU/Linux distribution that can replace the reMarkable operating system, allowing you to run just about any Linux application including command line or GUI software. There are a few things to keep in mind though. 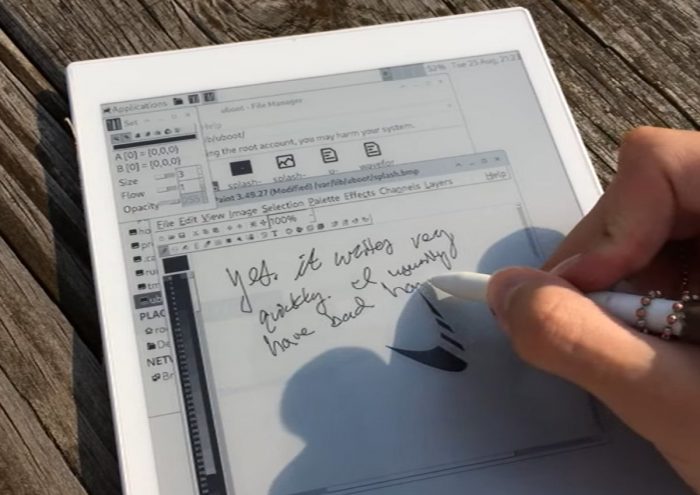 I imagine advanced users may be able to find their own workarounds, either by adding the necessary closed-source drivers or by using a USB WiFi dongle.

While WiFi won’t work out of the box, most other hardware is supported, including the touchscreen and EMR digitizer (for use with the pen), hardware buttons, and power management features. There’s also a custom desktop and user interface that’s been optimized for ePaper displays.

A second thing to keep in mind is that while the operating system is free as in “you’re free to do what you want with it,” it’s not completely free as in “doesn’t cost anything.” While you can follow the available instructions to build and install the operating system from scratch, the easiest way to install it is to pay $20 for a pre-compiled Parabola-rM installation image.

Half of the proceeds going to the Free Software Foundation and the Parabola Project, and the price gets you a compiled installation image, an installation manual, support files, and 6 months of updates, among other things.

You can find more details at the Parabola-rM website, or visit the main Parabola site to learn more about the operating system that’s been ported to to the reMarkable tablet.