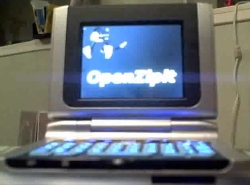 It can also send messages to cellphones over SMS. The only catch is that you’ll need to sign up for a $10/month plan in order to use the Zipit… or at least in order to use it as intended.

If, on the other hand, you want to find a new use for this handheld device, you might be interested in running Linux, installing DOSbox, or maybe an NES emulator. The Zipit has a 300MHz XScale processor, 32MB of RAM, and a Mini-SD card slot for stroage. It has a 2.8 inch QVGA display and a 1000mAh Li-Ion battery. It connects to 802.11b/g WiFi networks. And if you follow a series of steps from hacker Hunter Davis, you can install a working Linux operating system with the Fluxbox window manager.

All in all, you end up with a pocketable device with a QWERTY keyboard, mouse emulator, and ability to run Linux applications including the open source MPlayer media player. For about $50.

You can check out a video of the Linux powered Zipit after the break.

20 replies on “Turn a Zipit Wireless Messenger into a cheap, slow netbook by installing Linux”