Turing Pi makes computer boards that let you build your own ARM-based cluster computer that you can use as a home server, host for cloud apps, or development platform for distributed computing applications. Last year the company released a model that lets you build a cluster using older Raspberry Pi Compute Modules. That model currently sells for about $199.

Now the team has unveiled plans for the Turing Pi 2. It’s an updated model that supports newer Raspberry Pi Compute Modules as well as NVIDIA Jetson Compute modules. The Turing Pi 2 is expected to be available launch in early 2022. 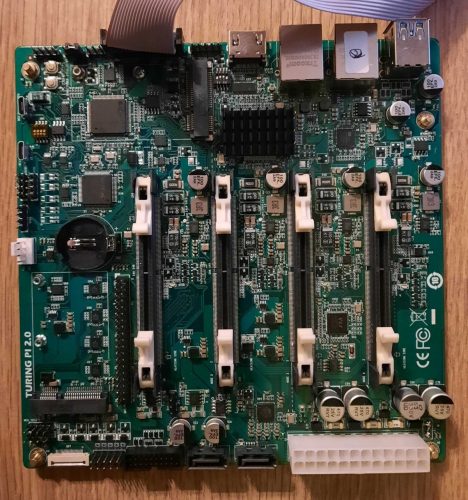 The new model is compatible with Raspberry Pi Compute Module 4 and NVIDIA Jetson Nano, Jetson TX2 NX, or Xavier NX compute modules. With some of those modules supporting up to 8GB of RAM each, that means a fully maxed out Turing Pi 2 can support up to 32GB of RAM.

And thanks to its dual SATA III and Mini PCIe Gen 2 connectors, you can load it with as much hard disk or SSD storage as you need, along with other accessories.

That said, in order to make the Turing Pi 2 more compact than the original model, the company dropped a few features. For example, it only supports up to four nodes (the Raspberry Pi or NVIDIA Jetson computer modules) instead of 7. It only has a single 40-pin GPIO connector instead of seven. And it has no 3.5mm audio jack (but you can get audio out via the HDMI port).

But the Turing Pi 2 does have a few upgrades in addition to the new compute modules it supports. There are now two Gigabit Ethernet ports instead of one. And while there are half as many USB ports, the four ports that remain are all USB 3.0 instead of USB 2.0.

Since the new board is the size of a standard mini ITX board, it also takes up less space and should be easier to fit into a compact case.

Turing Pi notes that the cluster board will support external hardware including extension boards that bring features like 5G modems, LoRaWAN gateways, and Zigbee wireless capabilities.

Designs for the Turing Pi 2 are still being finalized, but the plan is to begin taking pre-orders this fall and then to start shipping the board to customers in the first quarter of 2022.