Now that Google has released tools developers can use to add Chromecast support to their apps, we’re starting to see developers offering new ways to use Google’s $35 media streaming device. That includes apps like photo slideshow viewer Dayframe, and surprisingly enough at least one Windows Phone app called Tube Cast. 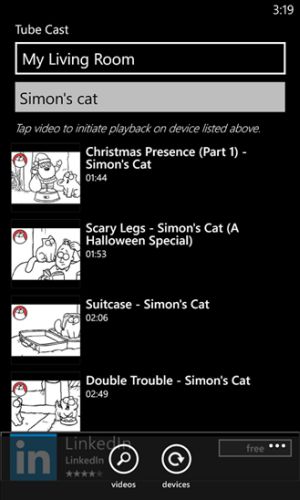 Google’s Chromecast officially lets you stream content to a TV by using Android and iOS apps or by casting videos from a Google Chrome browser tab on a PC. But the makers of Tube Cast have figured out how to use a Windows Phone handset to stream videos from YouTube.

Like most Chromecast apps, Tube Cast is basically a remote control for your TV. You can use it to select YouTube videos and tell you Chromecast to stream them straight from the internet — then you can set aside your phone, run another app, or turn it off entirely because the video is streaming from the web, not from your phone.

Unfortunately Tube Cast is pretty rough around the edges. You can’t use it to pause, stop, fast forward, or rewind a video. All it does is start a video. And you’ll need to disable mobile data on your phone in order for it to even find the Chromecast on your WiFi network.

Still, it’s pretty nifty to see proof that you can use a Windows Phone device to control a Chromecast at all. Hopefully Tube Cast or other apps will add more functionality in the future. Right now the app seems like little more than a proof of concept.