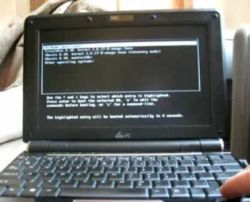 I finally got around to installing Windows 7 beta on my Asus Eee PC 1000H last night. I downloaded it shortly after returning from CES, but I’ve been so busy I haven’t had time to use it. But last night I set aside a few hours to install Windows 7 and CrunchEee on my netbook and watch some bad TV while waiting for files to copy.

I shot a short video showing the boot times for each OS, which you can see after the break. Keep in mind I have two different bootloaders to sift through here, GRUB and the Windows 7 bootloader. So if I want to launch CrunchEee I just hit the button for it at the first menu. But to launch Windows XP I need to first select Windows and then scroll down to select Windows XP. This slows the boot process down a bit.

I’ll be using Windows 7 a bit more over the next few months and you’ll be able to keep up with my latest tips and impressions both here and at Download Squad, where I’ll be covering the less netbook-specific aspects of the operating system.

Now on to the video:

7 replies on “Triple Boot Video: Windows 7, XP and CrunchEee on my Eee PC”