Just a few days after launching a crowdfunding campaign for a portable device that functions as both as Windows PC and an Android phone, developer Shane Lewis says he’s managed make two hardware improvements.

The Trinity is a portable device with a 5 inch display, dual HDMI ports, and two full-sized USB ports. Under the hood, it has the guts of two separate devices: a Windows PC with an Intel processor and an Android phone with an ARM-based chip.

But some of the specs were a bit underwhelming, including the screen resolution and battery life. Now Lewis says he’s addressed both… a bit. 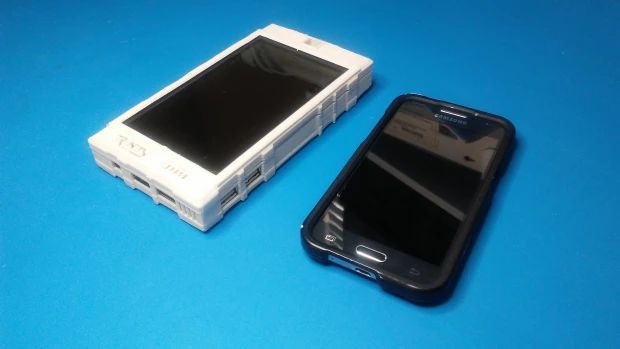 That means you should be able to get 8+ hours of battery life when using only the ARM processor or more than 2 hours of run time when using Windows and Android simultaneously.

Sure, neither of those are earth-shattering features when you compare the Trinity with other smartphones. But this device isn’t like other smartphones. It’s basically a full-fledged Windows PC and an Android phone stuffed into a small case.

Plug in an external display or two and you can even use it to power a complete Android and Windows experience simultaneously. Or run both operating systems on the phone at the same time and hit a button to switch from the mobile-friendly Android user interface over to Windows when you need to edit a document or run a Windows-only application.

What remains to be seen is whether the upgrades will be enough to jumpstart the crowdfunding campaign. Two days after the Indiegogo campaign launched, the project has raised less than $2000 in pledges… toward a goal of $767,000.