Smartphones are generally designed to give you quick access to apps that you may want to use on the go, while desktop and notebook computers have bigger screens, faster processors, and are generally optimized to let you do things like edit documents, surf the web, get work done, or play graphically detailed games.

But Shane Lewis has been working on a device that bridges that divide in an interesting way. When I met Lewis at CES last year he was calling his solution the Nitro Duo — because it’s both an Android smartphone and a Windows PC.

Now he’s updated the platform and he’s getting ready to sell it to the public. The latest version is called the Trinity, and if Lewis can raise enough money through a crowdfunding campaign to fund production, it could begin shipping by the end of the year. 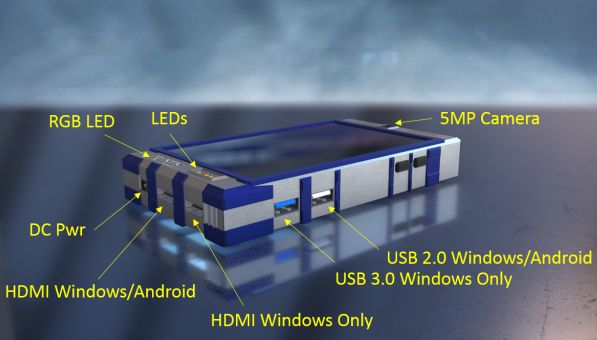 Over the past few years we’ve seen a number of attempts to bring desktop-like features to smartphones. Microsoft’s Continuum for phone software lets you connect a phone like the HP Elite x3 to a monitor, keyboard, and mouse and use it like a computer… that runs Windows 10 Mobile software.

Samsung’s new Galaxy S8 line of smartphones can work with a docking station called DeX that also lets you hook up a keyboard, mouse and display and get a desktop-style user interface. But you still end up running Android apps.

The same can be said of Jide’s Singularity platform, which is designed to allow Android phones to work like desktop computers. Jide founder David Ko has argued that as more people get used to the idea of using Android as a desktop OS, we’ll see more developers offer desktop-class software for the platform. But we’re not exactly there yet.

And Canonical recently gave up on its plans to bring “convergence” to Ubuntu Linux by offering a version that can run across phones, tablets, and PCs.

So here’s what makes Trinity different from all of those: it’s a full-fledged Android phone. And it’s a full-fledged handheld Windows PC. I don’t mean it’s a dual-boot system. I mean there’s hardware for two completely different computers under the hood, but they share ports, a display, and networking features, among other things.

The upshot is that you can use a Trinity device as a phone when you want a phone experience, or as a Windows computer when you want a Windows machine. You can turn off whichever system’s not in use. But you can also keep both running simultaneously and switch the display to show whichever you need at any given moment.

Unlike the prototype I saw at CES 2016, the Trinity also doesn’t require a docking station to work as a desktop. It has full-sized USB and HDMI ports which you can use to plug in a display, keyboard, or other accessories. In fact, you can even plug in two displays at once: one for Android and one for Windows.

The Windows experience is powered by an Intel processor, at least 4GB of RAM, and at least 128GB of mSATA solid state storage.

Android is powered by an ARM-based processor, 2GB of RAM, and a microSD card.

Here are a few things you might want to know before pulling out your wallet though:

Lewis is using components he’s been able to source and work with, but some of those components are a bit on the older side. So while there are some features the Trinity has that you won’t find on most phone-sized devices, it also has a low-resolution display and previous-gen processors.

Here’s what you get with the entry-level Trinity One:

There are also higher-priced options with beefier specs. Each model has the same Freescale i.MX6 quad-core ARM Cortex-A9 processor and 2GB of RAM dedicated to Android. But some of the other features are upgraded:

Lewis hopes to begin shipping Trinity devices in December, 2017… but only if he can raise $767,000 through an Indiegogo campaign. That’s a pretty steep goal for a niche product like this.

But the good news is that it’s a fixed funding campaign. That means if you make a pledge and the campaign fails to meet its goal, you won’t have to pay for a device that’s unlikely to ever arrive.