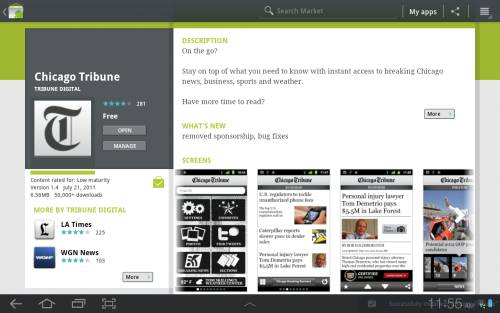 It looks like Philadelphia won’t be the only city where you can pick up a cheap or free tablet courtesy of your newspaper company. Recently the publisher of the Philadelphia Inquirer and Philadelphia Daily News announced plans to offer a discounted Android tablet to Philadelphians that signed up for subscriptions to the company’s digital news apps. Now The Tribune Company is preparing to launch a similar project.

The Tribune Company is based in Chicago, but in addition to the Chicago Tribune, the company operates a number of newspapers and television stations around the country.

According to CNN, the plan is to offer free or cheap Android tablets to folks who sign up for subscriptions. The details sound like they’re still up in the air. It’s possible that mobile broadband data plans might be part of the deal. In other words, while the tablet might be cheap or free, you’ll probably have to spend a fair bit of cash over the course of your service contract in order to get the mobile device.

It’s not clear yet who will build the tablet, but Tribune is apparently talking to Samsung and other device makers.

What do you think? Would you be willing to sign up for a newspaper subscription to get an Android tablet? Or would you rather just pay for your own and read the news for free online — assuming newspapers continue to offer free content without erecting paywalls.

3 replies on “Tribune Company to offer tablets to newspaper subscribers”