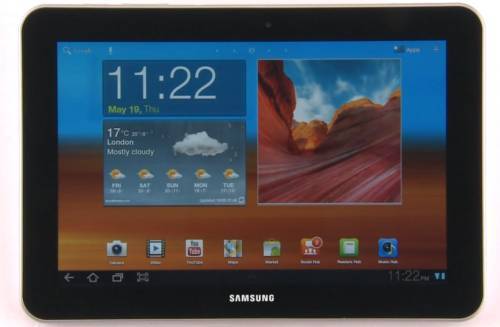 Samsung is holding an event in New York City on August 3rd to officially launch a software update for the Galaxy Tab 10.1 Android tablet. The update will include the TouchWiz user interface and a new Samsung Media Hub. Users that install the update will also find music and eBook apps frm Amazon and Scrabble-clone Words with Friends on their tablets, whether they want them or not.

The company will hold a press conference in New York to introduce the software update, and media attending the event will be able to get the new software on-site the same day. I’m guessing it will start rolling out as an over-the-air update for existing tablet users after that.

The Samsung Galaxy Tab 10.1 runs Google Android 3.1. Samsung had always planned to offer its TouchWiz software as well, but in order to get the tablet out the door as quickly as possible the company shipped it with pretty barebones version of Honeycomb.

The new software will change some icons and other graphics, give you a more useful control panel, and add a number of new home screen widgets for social networking, media, pictures, clock, and calendar functions. Samsung has also designed its own calendar application.

Also included are 6 “mini apps” that allow you to run an application in a small window without minimizing the application running in the background. These include a note-taking app and a calendar app.

If you can’t wait until next week to get your hands on TouchWiz, there’s a hack that allows you to install it today — but don’t blame me if you end up frying your tablet.