Toshiba has been playing with the idea of a tablet with a huge 13.3 inch display for a while. We first spotted a non-functional unit at CES in January. Now the folks at TechFokus in Germany have spotted a new version of the Toshiba AT330 tablet that not  only runs Android 4.0, but it packs a built-in TV tuner as well.

While 13.3 inch screens are common in notebooks, it’s unusually large for an Android tablet. Most products in this category have 10.1 inch or smaller screens, making them easy to hold in your hands.

But the TV tuner suggests that this tablet is designed for media, and when it comes to watching videos, I suppose the bigger the screen the better. Throw in a kick-stand, and you can watch TV with friends or family… although I’d still prefer to use my 32 inch HDTV for that.

If you’re wondering just how much bigger the AT330 is than Toshiba’s latest 10.1 inch and 7.7 inch tablets, Techblog has a few comparison photos. Suffice it to say, 3 inches probably makes a bigger difference than you’d expect. 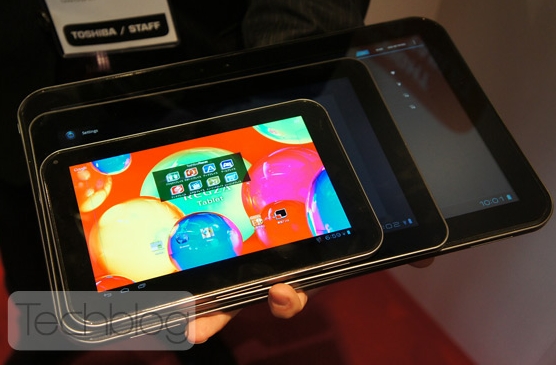 That extra space doesn’t go to waste though. Toshiba actually manages to fit a full-sized SD card slot into the side of the case. Most Android tablets have microSDHC card slots, at best.