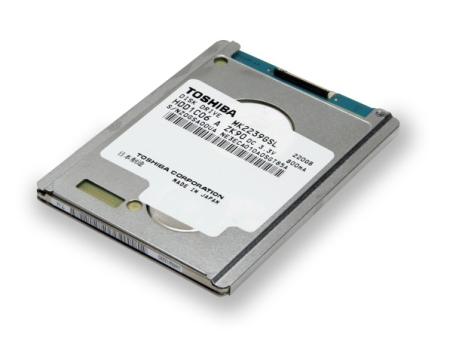 Sure, solid state disks are all the rage these days. But you know what’s still cheaper? Hard drives. So while the new Active Media 1.8 inch SSDs announced yesterday top out at 128GB, Toshiba has just announced a new line of 1.8 inch hard drives that will come in sizes up to 220GB. These little guys probably won’t be sold directly to consumers though. Instead you may one day find them preloaded in portable media players, tablets, and consumer electronic devices.

Aside from the copious amounts of storage, the hard drives are notable as the first 1.8 inch HDDs to use a LIF SATA connector. The upshot is that Toshiba says the new drives are about 10% smaller than a typical 1.8 inch hard drive.

Toshiba will offer three versions, a 160GB model, a 200GB model, and a 220GB version. The low power hard drives will use just 0.35 Watts when idle, and are designed to be quiet, running at between 14 and 15 dB.