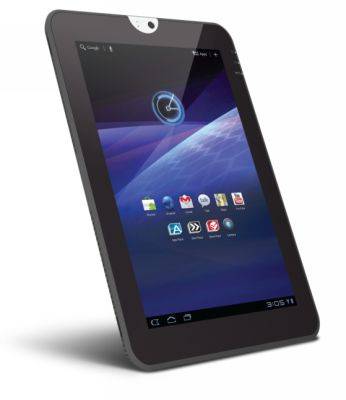 Toshiba’s 10.1 inch Thrive tablet with Google Android 3.1 Honeycomb is scheduled to ship in the US on July 10th. But it looks like you’ll have to wait a little longer to get your hands on the tablet if you’re north of the border. Toshiba has announced that the tablet will launch in Canada in August.

It appears the company hasn’t settled on a name for the device in Canada. While the US model is called the Thrive, the official press release for the Canadian launch simply refers to it as the Toshiba Tablet.

The rest of the specs appear to be the same whether you’re in the US or Canada. The tablet has a 10.1 inch, 1280 x 800 pixel display, a 1 GHz NVIDIA Tegra 2 processor, front and rear cameras, full-sized USB, SD, and HDMI ports, and 3 different configuration options: 8GB, 16GB, or 32GB. Prices will range from $429 to $579 and the tbalet is expected to be available from Best Buy, Future Shop, Staples, and Walmart.