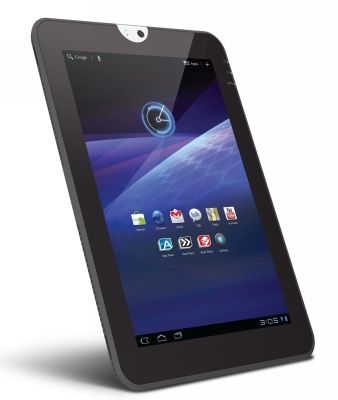 Toshiba has announced that its upcoming Android tablet will ship on July 10th with a starting price of $429. The tablet will go up for pre-order starting June 13th.

The Toshiba Thrive tablet will feature Google Android 3.1 software at launch. Like most other tablets running the latest versions of Android, the tablet will have a 1 GHz NVIDIA Tegra 2 dual core processor and a 10.1 inch, 1280 x 800 pixel display.

One thing that sets Toshiba’s tablet apart from the crowd is the fact that it will include a user removable battery — at least if the specs haven’t changed since the company started showing off an early version of the tablet in January.

The tablet will measure 0.61 inches thick and weigh about 1.6 pounds.

4 replies on “Toshiba Thrive tablet launching next month for $429”