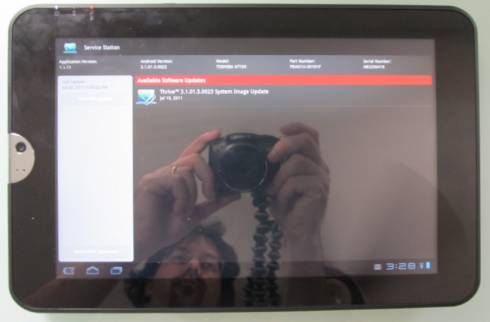 Many early Toshiba Thrive customers have noticed a bug that prevents the tablet from resuming from sleep mode properly. I didn’t go into this in my recent review of the tablet, because honestly, in the week or two that I’ve been using the device I haven’t run into this problem.

But if you’ve been waiting for Toshiba to fix the issue it looks like you won’t have to wait much longer. Toshiba has announced that it will release a software update next week that resolves the sleep/resume problem.

Users will be able to download the fix through the Thrive’s Service Station application. The update will also offer enhancements for multimedia playback.

The Toshiba Thrive is a 10 inch tablet running Google Android 3.1. It has a 1 GHz NVIDIA Tegra 2 dual core processor and a few unusual (for an Android tablet) features including full-sized HDMI and USB ports, a full-sized SD card slot, and a removable back cover that can be swapped out for a rear panel in a different color. You can also replace the battery by removing the rear cover.