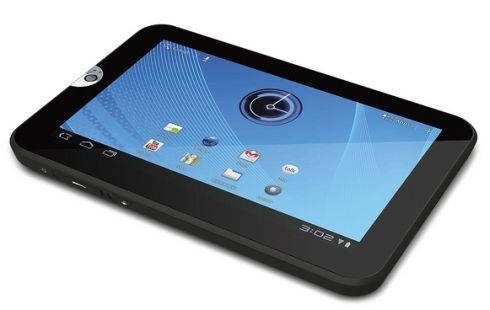 Toshiba promised it would offer a 7 inch version of its Thrive tablet in December, and it looks like the company is starting to deliver. While you won’t find the new 7 inch Thrive at any big-name retailers such as Best Buy or Amazon yet, a handful of lesser-known stores are carrying the tablet. Engadget notes that you can find it by Googling for the model number: pda03u-005007b.

For instance, eCost is listing the tablet for $468, CostCentral is out of stock, but shows a price of $428, and Applied Computer has some units in stock for $441.

The new Toshiba Thrive has a 1280 x 800 pixel display, a 1 GHz NVIDIA Tegra 2 dual core processor, and runs Google Android 3.2 Honeycomb. It will be available with 16GB to 32GB of storage, but it looks like only the 32GB model is showing up so far.

The tablet is thinner and lighter than its 10 inch sibling, weighing 0.88 pounds and measuring 0.47 inches thick. It has the same textured plastic cover on the back though, which makes the Thrive a little easier to grip than some smoother tablets. Unfortunately the back panel and battery aren’t removable on the smaller tablet.

While the 10 inch Thrive had full-sized USB, SD card, and HDMI ports, the 7 inch model has micro versions of each.