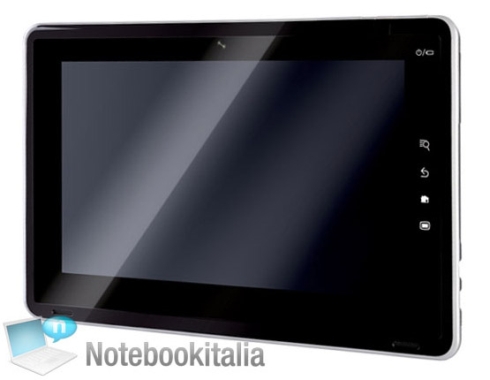 Toshiba, like pretty much every other company that’s ever produced a computer, is expected to launch a tablet soon. And the folks at Notebook Italia have snagged some of the first images of the upcoming Toshiba tablet, featuring an HDMI port, docking station, flash card reader, audio jack, and both full and mini-sized USB ports.

For the most part, the tablet looks like every other tablet we’ve seen in recent months. It has a nice big screen surrounded by a black bezel, and a bit of metallic flare around the edges. But unlike, say, the Apple iPad, the tablet has a decent array of ports and buttons — including the usual Android home, back, search, and menu buttons.

You can find more images at Notebook Italia. According to the site, the tablet will have a 10 inch widescreen display, an NVIDIA Tegra 2 chip, and as the buttons make clear, the tablet will run Google Android.