Toshiba recently unveiled a new ultrabook, the Satellite U845W, with an unusual display resolution of 21:9. At 14 inches (measured diagonally), this ultrabook’s 1792 x 768 pixel display is sure to grab consumer attention.

NotebookCheck got their hands on the European pre-production model (U840W) for review to see if the ultra-wide display is worth all the fuss. 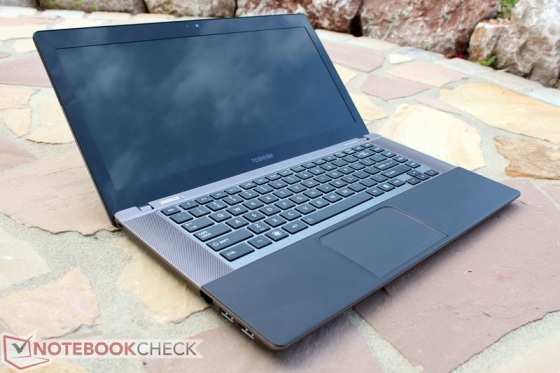 As Brad mentioned when Toshiba first released information on this ultrabook, the U840W is made for entertainment. The 21:9 aspect ratio means that users no longer have to contend with black bars at the top and bottom of movies. NotebookCheck found the picture quality good as well as the contrast and brightness distribution, which should please movie buffs.

However, the glossy screen means lots of reflections in bright light and sunlight as well as less than optimal viewing angles. For optimal viewing, it looks like the ultrabook will have to be in your lap or close by.

When not watching movies, NotebookCheck did find that having such a wide screen is great, especially when placing windows side by side. The drawback is that the display’s shortness means more scrolling when reading web pages or documents.

Other than the unusual display size, the Satellite U840W has pretty standard ultrabook specs and hardware. The keyboard is the same as on previous Toshiba ultrabooks and the clickpad seems just as meh as most clickpads on PCs.

Performance-wise the model NotebookCheck received features an Intel Core i5 processor (Ivy Bridge generation) that performed on par with similar systems. No discrete graphics here, though it looks like casual gaming is possible without too much lag.

The final specs and pricing for the European version aren’t set in stone. The ultrabook is expected to sell for $999 and up when it launches in the US this month.

Go to NotebookCheck to read the full review.