The Toshba Satellite Radius 11 is a Windows notebook with an 11.6 inch display and a 360 degree hinge. Push the screen back until the lid is back-to-back with the keyboard and the notebook becomes a tablet.

Toshiba unveiled the Satellite Radius 11 in Europe in September. Now the company says the convertible laptop is coming to America. It’ll be available starting October 26th for a starting price of $330. 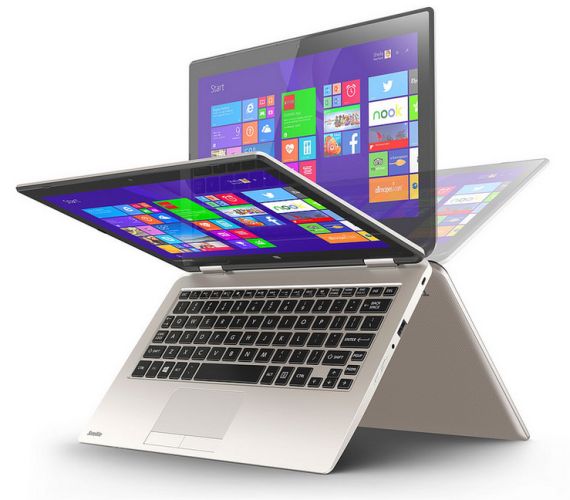 Toshiba’s new convertible is a compact laptop (or heavy tablet) that weighs about 2.9 pounds. It has a 1366 x 768 pixel display and the keyboard automatically locks when the system is in tablet mode so you won’t accidentally press a key when holding the computer.

Several different configurations will be available, with the system supporting:

Toshiba says you can use the Windows 8.1 laptop in 5 different modes: laptop, tablet, tabletop, presentation, and audience. But basically what that means is that if you’re not using the Radius 11 as a notebook or tablet, you can prop it up at a variety of different angles including some where the keyboard is hidden behind the screen.

The company also sells a Radius laptop with a 15.6 inch display. But that model features an Intel Core i5 Haswell processor and high-end specs along with a matching high-end price. It sells for around $900 and up.