The Toshiba Portégé Z20t is an ultrabook with a 12.5 inch display which you can detach from the keyboard for use in tablet mode.

The 2-in-1 tablet is powered by an Intel Core M Broadwell processor, has a full HD display, and features support for a Wacom digital pen for writing or drawing.

First launched in Europe late last year, the Toshiba Portégé Z20t ultrabook will be available in the United States this month for $1399 and up. 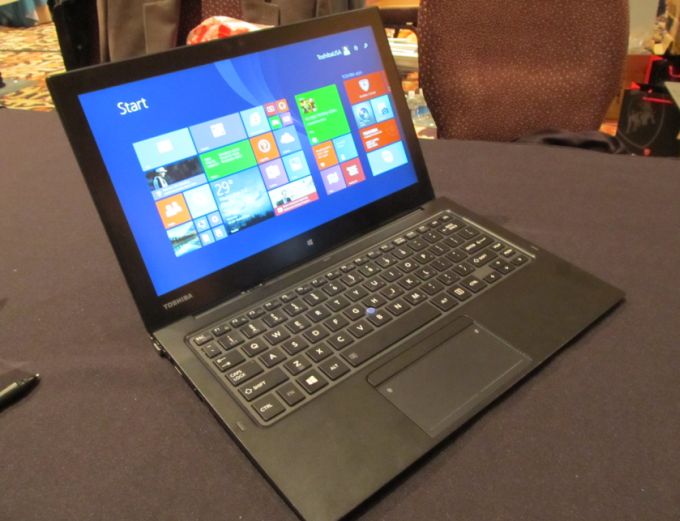 Toshiba will also offer a cheaper model starting in February. For $899 you can get the Portégé WT20 tablet… but that model won’t come with a keyboard dock or Wacom digitizer.

The Toshiba Portégé Z20t tablet weighs 1.6 pounds, gets up to 9 hours of battery life, and has a fanless design with a magnesium case. Add the keyboard dock and you have a 3.3 pounds laptop that gets nearly double the battery life, thanks to a second battery in the keyboard section.

The system supports up to 8GB of RAM, up to 256GB of solid state storage, 802.11ac WiFi, Bluetooth 4.0, and both finger an pen input, with support for 10-point multitouch detection or pen detection of up to 2048 levels of pressure sensitivity.

Toshiba includes a micro HDMI port, microSD card slot, and micro USB ports on the tablet itself, while the keyboard dock has Gigabit Ethernet, two USB 3.0 ports, and an HDMI port.

An entry-level model with an 800 MHz Core M processor will sell for $1399, but models with faster versions of Intel’s low-power Broadwell chip will also be available with prices up to $1699.