Toshiba has been taking a shotgun approach to the tablet space recently, introducing Android tablets with 7, 7.7, 10, and 13 inch displays. But it looks like Toshiba might have something else in the works as well.

Patent Bolt uncovered a patent application for a communications system that combines a tablet, cordless phone, and a docking station. It seems like the sort of thing that could be aimed for corporate environments, but it might also make an interesting home phone replacement… which you could also use for video calls, gaming, surfing the web, and more. 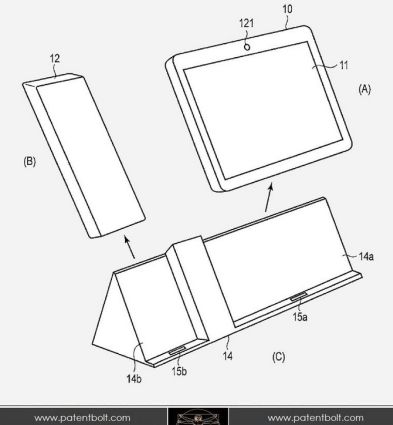 There aren’t a lot of technical details about the system. But it includes a “touchpad terminal” that looks an awful lot like a tablet. You can use it as a standalone device, or slide it into the cradle to use it with other peripherals (and to charge it).

On the other side of the cradle is a spot for a digital cordless telephone. This doesn’t appear to be a smartphone, but rather a phone that you could use around the office or home to make phone calls. It’s basically a wireless mic and speaker for use with the touchpad terminal (which also has its own built-in mic and speaker), although you may also be able to use it as a regular telephone.

One reply on “Toshiba patent reveals a tablet, dock, and handset”