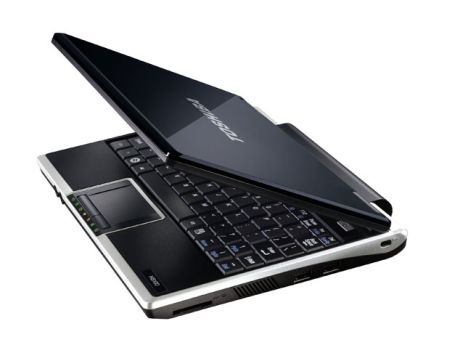 Almost every major netbook that’s been announced over the last few months has sported the same specs: 1.6GHz Intel Atom CPU, 9 or 10 inch, 1024 x 600 pixel display, and maybe a high capacity hard drive or relatively small solid state disk. So there’s not a ton of reason to expect much variety in terms of basic performance. Instead, we often wind up looking for the little things that set one netbook apart from the others. For example, the Samsung NC10 seems to get better battery life than many of its peers, and the HP Mini 1000 has an excellent keyboard.

APC Magazine has posted the first detailed Toshiba NB100 netbook review I’ve seen. And there doesn’t really seem to be much to set this netbook apart from the crowd. Instead, it’s pretty much exactly what you’d expect based on the specs: A decent performer but nothing special to look at.

The reviewers weren’t impressed with the case design. Personally I find it somewhat attractive. But I’m not a big fan of sticking the status LEDs under the touchpad. The keyboard suffers from the tiny shift key stuck off to the right of the Pg Up button that plagues many netbooks with cramped keyboards.

On the other hand, there’s a RAM access panel on the bottom of the unit which makes RAM upgrades a snap. And the Toshiba NB100 is one of the few netbooks I’ve seen that actually has a few ports on the back of the unit instead of the sides.

The NB100 gets about 2.5 hours of battery life out of its 4 cell, 29Whr battery, which is about standard for a netbook with a standard battery. I’m not sure if Toshiba will offer an extended battery option, but if history teaches us anything, it’s that third party battery makers will soon be releasing super high capacity batteries. I’m betting you’ll be able to pick one up on eBay within the next month or two.

2 replies on “Toshiba NB100 reviewed: Pretty much what you’d expect”