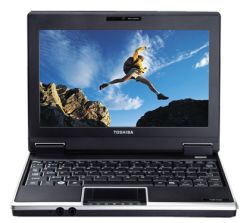 The Toshiba NB100 netbook is now shipping in Europe, Canada, and a handful of other locations that aren’t the United States. Amazon UK is selling the Windows XP version of the Toshiba NB100 for £299. You can pick up the same model from Amazon’s German site for 399 Euros, or you can get the model running Ubuntu Linux for 333 Euros. Keep in mind, the Linux model has 512MB of RAM and an 80GB hard drive, while the Windows XP model has 1GB of RAM and a 160GB hard drive.

Liliputing reader Krystan wrote in to let me know that you can also find the Toshiba NB100 at Future Shop in Canada, where the Windows model is selling for $480CDN.

I did find one US retailer that claims to have the NB100 in stock. But I’ve never heard of 4AllClients before. Has anyone ever had any experience with them?

Sascha from Eee PC News already managed to get his hands on a Toshiba NB100 running Linux, and he shot a video overview of the netbook, which you can find after the break. He compares the video to several other netbooks including the Dell Inspiron Mini 9 and the Asus Eee PC 701. And he demonstrates the Ubuntu Netbook Remix software that comes with the computer. One thing worth noting is that it takes about 65 seconds for the operating system to boot, which is kind of an eternity when it comes to netbook boot times. It’s possible that you could speed up the boot performance by upgrading the RAM.