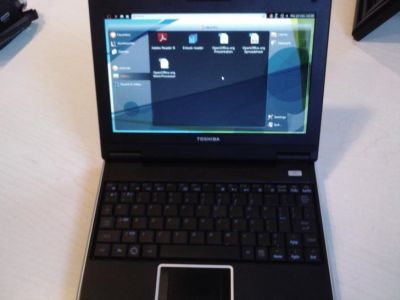 The Toshiba NB100 is about to go on sale in the UK, and two British tech blogs have had a chance to spend some time with the first netbook from Toshiba. TechRadar says the laptop has a good screen, handles Ubuntu 8.04 (with Ubuntu Netbook Remix), well and comes with 80GB to 120GB of storage space. The NB100 has just 512MB of RAM, but that didn’t seem to affect performance.

TechRadar did take issue with the keyboard though, saying that it’s smaller than keyboards on similar netbooks which makes typing a bit tougher than it needs to be. The folks at Mobile Computer Magazine saw things a bit differently, claiming that the keys on the Toshiba NB100 are actually a bit larger than the keys on an Eee PC 901, which has the same 8.9 inch screen size.

A few other tidbits I picked up from these two articles:

You can check out Mobile Computer Magazine’s video overview of the Toshiba NB100 after the break.