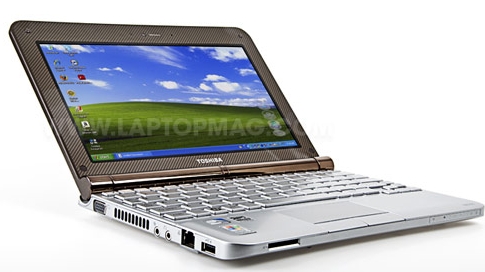 The Toshiba Mini NB205 may be just a rebranded Toshiba Dynabook UX or Toshiba Mini NB200. But it’s also happens to be Toshiba’s first entry into the US netbook market. The company’s Satellite NB100 was never released in the United States. And that might not be such a bad thing. By all accounts, the new model has a better keyboard, a larger screen, and spectacular battery life.

Laptop Magazine’s Joanna Stern has published a detailed review of the NB205. And while on paper it looks a lot like other netbooks, with a 1.66GHz Intel Atom N280 CPU, 1GB of RAM (expandable to 2GB), and 160GB hard drive. But this 10.1 inch netbook delivers 8.5 hours of battery life on a single charge.

Stern was also impressed with the netbook’s design, praising the attractive lid and case.

The NB205 will set you back $399 if you want the version with the 6 cell, 8.5 hour battery. A 3 cell version will also be available for $349 soon, but that model will only come in black and will get approximately half the battery life.