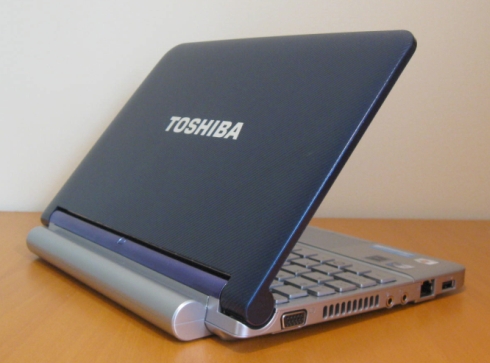 The Toshiba NB205 is one of the more popular netbooks launched in the second half of 2009 thanks to its large touchpad, roomy keyboard, and stellar battery life. Toshiba recently launched an updated version of the NB205 that ships with Windows 7 Starter Edition and a larger hard drive than earlier models.

In some ways, the new model can be considered an upgrade, since it packs a newer operating system and extra storage space. But there are some down sides as well.

The Toshiba NB205 has a distinctive design with a silver/gray plastic chassis and colorful, textured lid. The laptop is available with blue, brown, pink, and white tops. Each has a Toshiba logo and a diagonal stripe pattern on the lid. 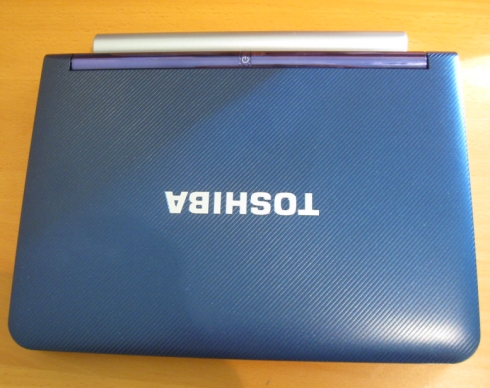 Around the sides of the laptop you’ll find 3 USB ports, an Ethernet jack, a VGA port, and sturdy metal mic and headphone jacks. I always appreciate it when manufacturers use metal jacks instead of plastic ones, as they tend to hold up better over time if you’re the sort of person that spends a lot of time plugging in and then removing headphones.

On the front you’ll find an SD card slot and a series of status indicators that light up to show when the WiFi is enabled, when the computer is plugged in, and so forth.

The edges of the laptop are curved, but overall the Toshiba NB205 has a boxier, more angular look than most netbooks. The design isn’t intrinsically better or worse than that of 10 inch netbooks from other companies. It’s just a matter of taste.

The speaker is located on the bottom of the netbook, so it points down at the table or your lap. The microphone is placed next to the 0.3MP webcam above the screen. 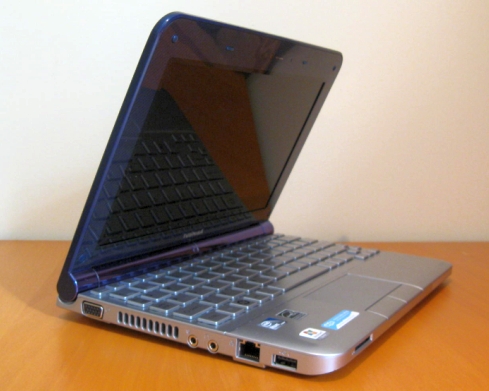 One nice touch is the power button which is located in the middle of the computer just above the keyboard. 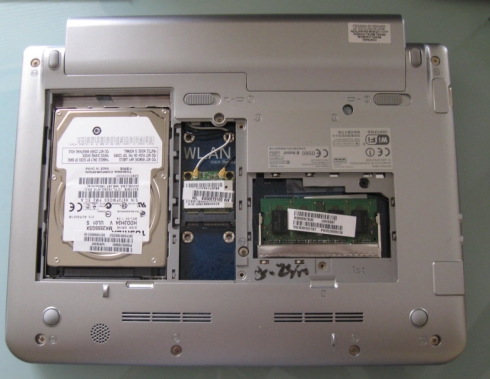 On the bottom of the laptop you’ll find two access panels which you can remove to upgrade the RAM, hard drive, and wireless LAN cards. There’s only a single RAM slot, so you’ll need to remove the 1GB stick and add a 2GB module if you want to upgrade the RAM.

The Toshiba NB-205 features an accelerometer which detects when you’re computer is in motion. It can temporarily shut off the hard drive to prevent damage or data loss if your computer falls to the ground.

This is generally a good thing, but the utility that detects motion is pretty aggressive if you use the default settings, and if you’re not careful to make sure that your laptop is firmly planted on your lap or on a table, you’ll get a warning notice every few seconds as the computer shakes while you type. Fortunately you can adjust the sensitive and/or disable this message and the hard drive starts back up again very quickly so you’ll probably never notice the protective measure againonce you disable the warning.

I have a love/hate relationship with the keyboard on the Toshiba NB205. On the one hand, the island-style keyboard is nice and large, the keys are nicely spaced and overall very responsive. I scored 109 word per minute on a typing test with this keyboard, which is one of the highest scores I’ve gotten using any computer, including models with 100% full sized keyboards. 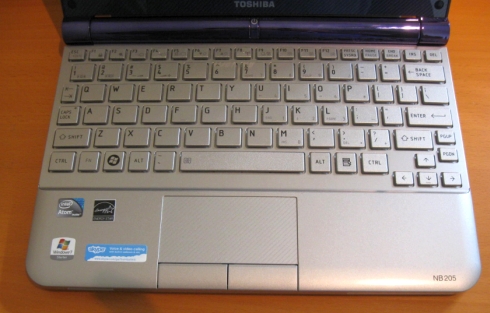 Another feature I like is that there’s actually a green LED built right into the Caps Lock key that lets you know when it’s enabled. Honestly, it would be nice if PC makers would just eliminate this mostly useless key. But since that’s probably not going to happen anytime soon, it’s nice to have a visual cue letting you know if you’re at risk of sending out an email in ALL CAPS.

But I find the location of many of the special function keys annoying. The Home and End keys are in the Fn key row, and I honestly didn’t even notice them until someone pointed them out, because they’re so far away from the lower left corner of the keyboard where I’ve come to expect them after using dozens of other netbooks. You can also hit Fn+ F10 to turn the right side of the keyboard to toggle the special function keys on the right side of the keyboard turning the 7 and 9 keys into Home and End keys, but then you lose the ability to type the numbers 7 and 9, so I wouldn’t advise doing this very often.

I’m also not fond of Toshiba’s decision to place the volume up and down keys on the 3 and 4 keys. I’m used to hitting a Fn key in the top row or the arrow keys to adjust the volume, not Fn+3 or Fn+4. But I’m at a disadvantage here, because as someone who reviews laptops, I use different keyboards all the time. So I find it difficult to adapt to the nuances of a keyboard that’s a bit out of the ordinary sometimes. If you were to actually purchase this netbook and use it on a regular basis as one of your primary machines, odds are you’d get used to the location of the special function keys much more easily. 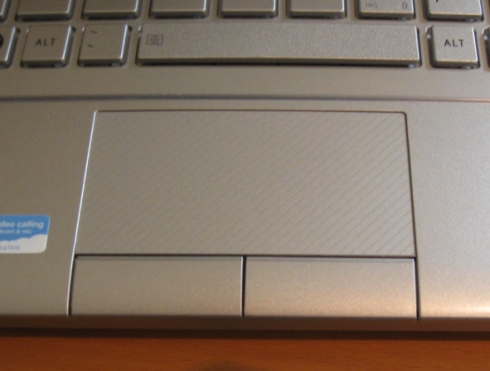 The touchpad is another story. The Toshiba NB205 has one of the widest, easiest to use touchpads of any netbook on the market. There’s just one caveat: There are almost too many configuration options.

For example, out of the box, I noticed that I was constantly swiping the wide touchpad with my palm while I was typing on the keyboard. This caused the cursor to move unexpectedly and kind of messed up my typing mojo. Naturally, I looked for an option to temporarily disable the touchpad input while typing, but I couldn’t find one.

It turns out it’s there, but it’s very well hidden. Here’s what you have to do to enable it:

Simple, right? I don’t know how I could have missed it. On the one hand, it’s nice to have so much control over the way the touchpad operates. On the other hand, if not enabling this feature by default leads to some pretty erratic computer behavior, the very least you could do is put the option to disable tapping on the first page of the mouse settings. 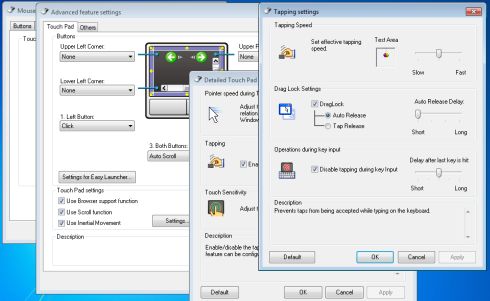 While the touchpad doesn’t support multitouch gestures, you can use the edges of the pad as a scrolling area, and you can adjust the size of the scrolling region. You can also use the touchpad as a program launcher by associating applications with certain actions, such as clicking the upper right corner or lower left corner.

Toshiba also chose to place two distinct buttons below the touchpad instead of a single button with a rocker dial, which makes it easier to differentiate right and left clicks.

One of the best features about the Toshiba NB205 is its long battery life. I’ve read dozens of reviews of the Windows XP model pointing out the netbook’s spectacular battery life. Laptop magazine, for example, claimed that the Windows XP version of this netbook could run for nearly 9.5 hours. But under Windows 7, I found I could squeeze just 7 hours and 9 minutes out of the N205.

Now, don’t get me wrong. 7 hours of battery life is pretty great compared with most notebooks on the market today. But I’d be happier with 9 hours. Blogger Kevin Tofel and I have been trying to get to the bottom of the discrepancy for the last few days, and the long and short of it is that it seems likely that if you have a choice of running Windows 7 and Windows XP on identical hardware, the battery will last longer with Windows XP.

That’s probably at least partially due to all the extra graphical effects baked into Windows 7, so disabling some features and changing some settings may help. But the Toshiba Mini NB205 ships with Windows 7 Starter Edition which doesn’t have all the advanced graphics found in higher end versions of the operating system, so it’s likely that something else is at play. It’s also possible that Toshiba could update its drivers and/or its battery management software to extend battery life in the future.

Toshiba packs the Mini NB205 with a number of utilities that give you a bit of extra control over the computer’s hardware. For instance, the ECo utility lets you adjust the power settings to get more out of the battery. 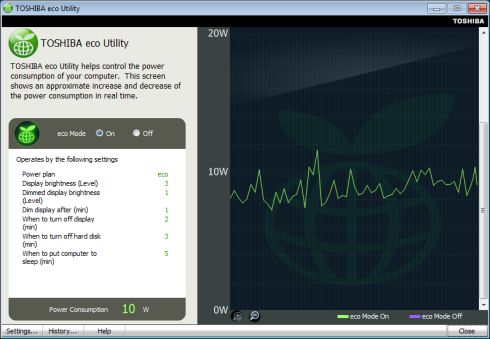 There’s also a PC Health Monitor which gives you a closer look at the computer’s performance, and a recovery application that lets you create a system restore disc for returning your computer to its factory default condition. 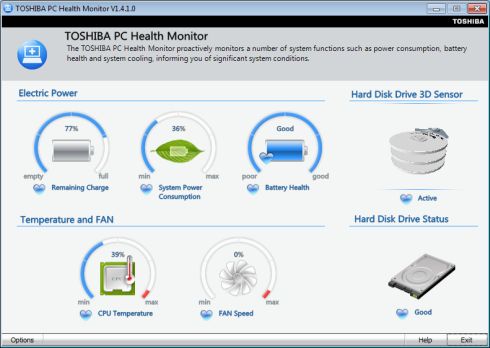 Toshiba also includes a webcam application and trial versions of Norton Internet Security and Quickbooks as well as a full version of Microsoft Works, the stripped down version of Microsoft Office. There’s also a pretty detailed Toshiba PC diagnostic utility that helps you detect any problems the computer’s hardware. 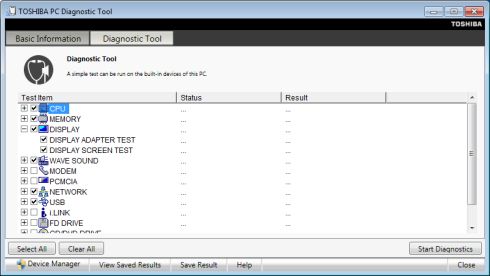 Probably the most significant software feature is the fact that the Toshiba Mini NB205 ships with Windows 7 Starter Edition. Almost every Intel Atom powered netbook launched on or after October 22nd, 2009 will run this version of Windows 7, but the NB205 is the first model I’ve reviewed with Windows 7 Starter.

For the most part, if a program can run on Windows 7 Ultimate or Windows 7 Home Premium, it can also run on Windows 7 Starter. So there’s not much need to worry about compatibility issues. But the operating system is more limited than higher end versions. For instance, users can’t change the desktop background. What you see is what you’re stuck with. 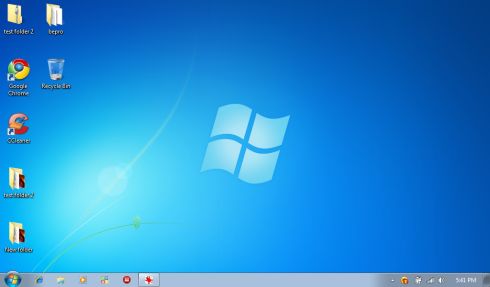 Windows 7 Starter also doesn’t have Windows Aero, Windows Media Center functionality, built-in backup and restore, BitLocker protection, or Windows XP compatibility mode. There’s also no 64-bit version of Windows 7 Starter. But if you want or need those features, you can always pay to upgrade to Windows 7 Home Premium, which should run just as smoothly on the netbook as Windows 7 Starter.

The Toshiba Mini NB205-N330 is an interesting machine. It has an excellent, if somewhat quirky keyboard and the best touchpad I’ve used that doesn’t support multitouch gestures. It gets decent battery life, although the battery doesn’t appear to last as long when running Windows 7 Starter as it does with Windows XP. And with all of Toshiba’s power saving settings enabled, the computer performance does slow down a bit. 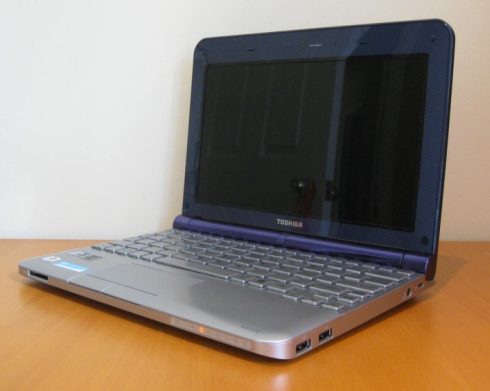 The limitations of Windows 7 Starter Edition might put off some potential customers. But the truth of the matter is, if you’re looking for a light weight, durable mini-laptop with long battery life and the ability to run a web browser and most Windows applications, it doesn’t really matter which version of Windows 7 you’re using.