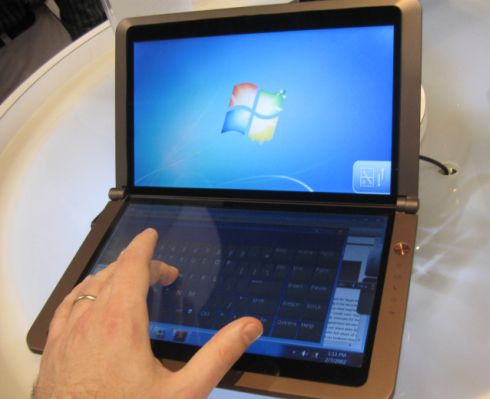 It’s starting to look like 2010 may not just be the year of the tablet… but also of the dual screen tablet/netbook hybrid. Earlier this year MSI showed off a concept device with twin 10 inch displays. You could use one display as a virtual keyboard and position the device like a netbook, or flatten the device and use it as a tablet. Recently Kno launched a seimilar device, but with twin 14 inch screens. And now it looks like Toshiba wants in on the action.

DigiTimes reports that Toshiba is working on a “dual-screen notebook” with twin 7 inch displays. It’s being developed in-house and has the codename “GuideBook.” The device could launch as early as this month.

It’s not entirely clear whether we’re talking about a dual touchscreen device with a virtual keyboard, or a more traditional notebook with pull-out displays to double your screen real estate. We’ve seen that before too.

For what it’s worth, the dual-screen fad isn’t limited to MSI, Kno, and Toshiba. HTC, Sony, and at least one company you’ve probably never heard of are exploring this space as well.

3 replies on “Toshiba may be building a dual-screen netbook”