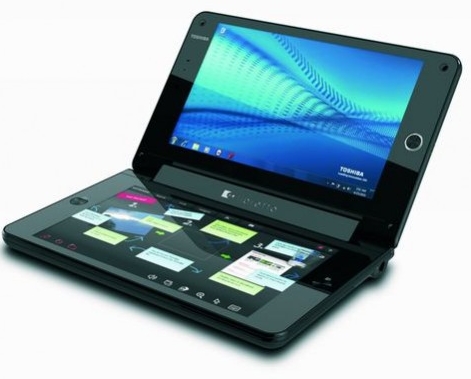 The Toshiba Libretto W100 is an innovative little computer which is either a dual screen tablet or a mini-laptop with a virtual keyboard instead of a physical one, depending on how you look at it. Toshiba plans to offer a limited number of the devices soon, but right now it’s only available in Japan — unless you’re willing to drop $1400 to order a unit from Conics, a retailer that specializes in exporting Asian computers to the West.

The folks at Wow Pow managed to get their hands on a unit from Conics, with the Japanese operating system converted to English. The site has the first unboxing video for the Libretto W100 that I’ve seen. There are also a couple of video overviews of the device. You can check out all the videos after the break.

As a quick refresher, the Toshiba Libretto W100 has two 7 inch capacitive touchscreen displays with resolutions of 1024 x 600 pixels. It has a 1.2GHz Intel Pentium U5400 processor, 2GB of DDR3 memory, and a 62GB solid state disk. The device supports 802.11b/g/n WiFi, WiMAX, and Bluetooth and has a webcam, USB port, microSD card slot, and comes with 2 or 4 hour batteries. It weighs just over 1.5 pounds.

Probably one of the most interesting things Toshiba has done with this device is give it several different virtual keyboards, allowing you to hold it in two hands and type with your thumbs or place it on a tablet and treat it like a traditional laptop. You can see more about the virtual keyboards in my first look video.

The list price is expected to be around $1100, but Conics charges a premium for exporting the tablet from Japan. There’s no word on when the Libretto W100 will officially launch in the US.

Now on to the videos.