Toshiba is getting into the wearable space with the launch of a fitness-tracking wristband called the Toshiba WERAM1100. I know, it’s a catchy name, right?

The activity tracker goes on sale in Japan this week, where it’s expected to start shipping August 20th. There’s no word on if or when we’ll see the device outside of Japan. 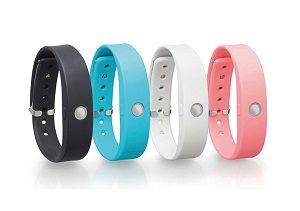 Like similar devices from Fitbit, Jawbone, Withings, and Nike, the Toshiba WERAM1100 can track activity including steps taken and distance traveled as well as sleep quality. It syncs data with your smartphone over a Bluetooth connection.

The mobile app also lets you count calories and even upload photos of your meals so that in addition to estimating calories burned as you exercise throughout the day, you can estimate how many calories you’ve consumed.

The Toshiba WERAM1100 gets up to 2 weeks of battery life and doesn’t have a display, but there’s a vibration feature that can alert you when you’ve met your goals for distance or pace and it can also function as an alarm.